Wow. Two posts in one day. Can you tell The Mrs. isn't home?

The following is a Certified True Story (with no asterisks). I had this dream Saturday night while sleeping at the wonderful Cambria Suites in Pueblo, Colorado. We went there to go to the Colorado State Fair, at which HannahC had four 4H exhibits (she got 3 Grand Champions and, I think, Champion on the fourth one). I submit for your analysis the following dream:

I am in prison, where I have been sent for some sort of DWI infraction, though I don't remember any of what happened. I just remember I'm supposed to be in prison. I am not in an ordinary cell because I am considered to be extremely dangerous and need to be kept in a special cell, like Hannibal Lecter.

The cell itself is a giant cube that is three stories high and has bars on the front in a 3x3 matrix, as though what had happened was they had taken three cells across and three floors up and just removed all the walls and ceilings to make one giant cell. The inside of the cell is tiled completely in shiny, white 12" ceramic tile. There are windows on the back of the cell up near the ceiling through which sunlight streams, making it very bright (given that everything is white tile).

The front of the cell looks out into another room that is the same size, but instead of tile, it is the drab, unpainted concrete you'd expect of a prison. There's a door that goes from that room out to the rest of the prison, but I don't know what it looks like out there as I can't see out it from in my cell. The guards keep watch over me at all times from this other room, lest I devise some method to escape and kill a bunch of people. They sit on what looks like uncomfortable wooden benches - long, rough wooden planks on legs, no backs to lean on so that they can't doze off.

I have no furniture whatsoever. I sleep on the cold tile floor, but this doesn't bother me because I spend all my time thinking about how afraid they all are of me, and how being such a complete bad-ass comes at some cost in personal comfort. But I can't for the life of me recall ever doing anything that would cause me to be considered dangerous. Still, it is reassuring that the guards fear me. I spend time thinking about how I would act if I were in a movie playing a dangerous prisoner and trying to act like that.

Suddenly, it is visiting hours. The guards open up the cell, and all the guys from my project at work come in. The guards don't lock the cell - they leave the door open. Everyone is just milling around between the cell and the adjoining guard chamber like it's some kind of cocktail party.

My co-workers brought me my coffee mug from work filled with the free coffee we get at work. How thoughtful. My boss asks me a couple work status-related questions, which I answer, because I haven't been emailing out my weekly status reports on account of me being locked up in prison.

One of the guys on the team comes up to me and says, "Hey check it out. I finally got my new Droid X!" I say how the thing I miss most about prison life is my Droid. Then, I get resentful that he has a Droid X, and I'm not even allowed my Droid in prison, so I snatch it away from him, wave it around, and yell very loudly so that the guards will hear, "Maybe I should shove this down your throat and choke you to death with it."

He looks frightened, and I feel bad cuz he's a nice guy that I had no intention of killing, but I was really just trying to impress on the guards what a shit job they are doing of keeping me, total bad-ass killer, from killing anyone. Then my boss slaps me on the back and says, "Quit screwing around. You can't kill any of us. You'd get fired."

And I nod, thinking to myself what a hell of a great deal it is that I get to keep my job even while I'm locked up in solitary in prison, and how I better not mess that up. But still, I think the guards should be taking quite a bit more seriously the fact that I am apparently some kind of devious, demented killer who bites people's faces off or something, and I am upset with the disrespect and shoddy work ethic from these low level government employees.

Then, someone says something obvious, "Wow. It must suck to be locked up in a cell and not be able to do anything you want ever and never have any fun at all."

Not being able to resist a straight line like that, I respond, "Yeah. It's like being married. Only here, they'll let me out after just 20 years."

At this, absolutely everyone stops talking and turns to me with aghast stares. My boss breaks the silence, "That's not funny, man. Don't even joke about that."

I try to think of something to say about his mom, but I can't.

I had Chicken on a Stick with a side of lo mein at the fair for dinner, in case that helps with your analysis.
Posted by CherkyB at 8:42 PM 1 comment: Links to this post

I've never gotten used to it

Some day, maybe. I've learned to expect it, I suppose. I imagine this happens to everyone, though. It just happened to me a couple hours ago. There I was, in the friendly neighborhood liquor store, picking up some provisions, when the Bacardi rep tried to sell me on exchanging out some of the brands I had selected for Bacardi brands (in this case, to trade my Tanqueray for Bombay Sapphire) in exchange for a $5 rebate and a free shot glass. She was young and blonde and, uh, well put together, so I let her talk me into it. Plus, I actually like Bombay Sapphire better, but I'm not willing to pay the extra $2 for it.

While I was filling in the rebate form, she glanced over my shopping cart and said,

Blonde Liquor Girl: "Yeah. That's why I asked you if you were having a party cuz it's a long weekend and I saw that you had so much...uh...OK. It'll take 4-6 weeks to get your rebate check in the mail."

Of course, the most fantastic part of all this is that the Deschutes Brewery truck was out front, and they were giving away free hot dogs, and I was hungry, and Deschutes beer was on sale. I got a 12-pack of Mirror Pond. Mmmmm.

The shot glass turned out to be total shite, though. Plastic.

Those of you who follow my occasional updates on FaceBook know that I'm heading out to go dove hunting tomorrow morning. And, yes, as I explained to The Childrens, that means I'll be hunting those nice little mourning doves that go "cooo cooo" and wake you up at the crack of dawn. Like the one that laid eggs in The Mrs.'s hanging flower basket on the front porch.

The Mrs.: "You spent a thousand dollars on hunting gear, and you'll probably only go once."

The Mrs. is quite prescient. She has never let me go again after that.

A while back, as I'm sure you all remember, I picked myself up a shotgun. Not because I had any particular use for a shotgun, mind you, but because I'm a man. And a man should own a shotgun. I also felt like I had enough pistols (for now), and enough rifles (given I'm not allowed to go hunting anymore), and I felt it was time to branch out some.

Well, up at work I've fallen in with this bad crowd of folks who honestly and truly own so many guns that they can't even name them all. The ringleader is a guy who used to be named Mark something-or-other, but that wasn't special enough so, I kid you not*, he changed his name to Harrison Balzonya. He's taken pity upon me cuz of my sorry state of being so henpecked, and he's decided to teach me how to hunt doves, as you don't need a tag for that at all, and there are a number of places within a half hour of home where you can do it.

[It'll help if you read this paragraph with the voice of Carson Kressley in your head] Plus, the thing that is so very fun about hunting birds is that you get to dress all up in urban-chic camouflage, not in that dreadful orange that big game hunters wear.

Yeah, OK, Carson probably isn't a huge fan of camo hunting gear. But the accessories are a blast. 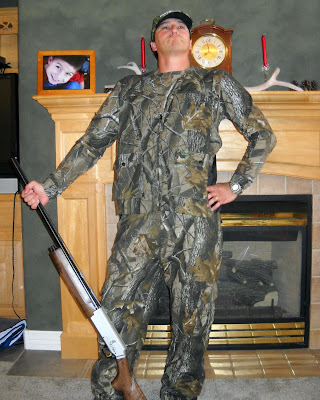 Mt hat doesn't match my clothes, and the gun isn't camo. But that'll be OK, cuz I understand that there probably won't be any doves where we're going hunting them anyways. It's a secret spot that usually mobbed on the weekends. I'll let you know if I kill anything. 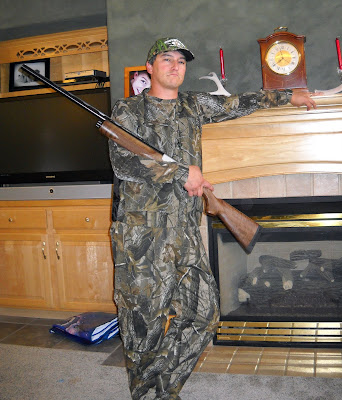 * as far as you know
Posted by CherkyB at 7:50 PM 4 comments: Links to this post