MaxieC, Man who Minces Not Words

We were sitting around discussing the logistics of trying to go anywhere on a vacation, when the Mrs. noted that some friends of hers have a house sitter who charges $20/day to watch the house and pets as long as she's allowed to have her boyfriend over.

Me, CherkyB: "Well, you know how a baby sitter comes over to watch the babies when parents go out?"

Me, CherkyB: "I didn't say you were. So, a house sitter is someone who watches your house while you're out. With all the pets we have, it's very hard to find people to watch them all, and Camp Bow Wow charges like $35/day just for FreddyC."

The Mrs.: "And we had to take the rat over to K's house, and the guniea pigs to N's house, and I had to have S come over to feed the fish and water the plants."

Me, CherkyB: "Yeah. You remember how we took that road trip to Barfalo last year to go to Auntie D's wedding? Well, I guess Auntie D's and Uncle D's wedding. Wasn't that nice of them to schedule their weddings at the same time so we could go to both in just one trip?"

Me, CherkyB: "I suppose they did. By the way, who got the better deal out of that marriage?"

Me, CherkyB: "Auntie D did. You know why? Cuz she's the woman. Women always get the better deal in a marriage."

Me, CherkyB: "Because the entire institution of marriage is structured around the desires of women. There's really nothing about marriage designed for men."

MaxieC: "That's not true. The man has a very important part in a marriage."

MaxieC [making a sweeping had gesture where he holds out his left palm and swings his right arm down to land his index finger on said palm]: "The man has to deposit the sperm!"

Yesterday, The Childrens and I were out working in the yard when it began to rain. There had been big thunderclouds overhead for a while, and the wind had whipped up and turned cold, so this was not unexpected. It's also fairly standard to have a thunderstorm in the afternoon during the spring around these parts.

We packed up all the tools that were out which, I believe, was a folding tree saw and My Precious lawn tractor. Then, upon HannahC's direction, we all climbed into the bed of the pickup, opened the garage door behind it, and sat watching the storm. Naturally, when you're sitting in the bed of a pickup, drinks are in order. So I got myself an ice cold Keystone Ice, HannahC got herself a caffeine free Diet Pepsi leftover from Grandmother Moo's visit, and MaxieC, ever the showman, got a bottle of sparkling grape juice and a cup.

Now, in the bed of my pickup, I have a ratcheting cargo bar. Except mine is really, really cheap cuz I got it at Harbor Freight. I've taken to heart that old pickup-owners maxim, "everything I own is either wet or stolen," and I've steadfastly refused to store anything of value in the bed. I do keep the cargo bar in there, hence it's a cheap one.

Well, The Childrens saw the cargo bar as a potential chair that they could sit on whilst peering over the tailgate. The new F150's tailgate is quite a bit taller than the old Dakota's was, and the found that they couldn't see over while just sitting on the bed floor. I told them it was a really cheap bar and would bend if they sat on it, and then I got 20-questions that involved variations of sitting on it that potentially placed less weight on it but that would quickly devolve into sitting on it, to which I replied "no." Finally, we decided that they could kneel between the cargo bar and the tailgate and lean against the cargo bar. Which they got bored of in about 30 seconds and came back across the bar.

Then, MaxieC poured himself another cup of sparkling cider, and he set the glass bottle down about 2" from his foot.

Me, CherkyB: "Yeah, but you'll squirm around and kick it over. You're really clumsy."

MaxieC: "Fine! I'll put it on the other side of the bar where no human is allowed."

Me, CherkyB: "No human allowed? You just spent the last 10 minutes over there trying to figure out different ways you could put your ass on the bar."

Me, CherkyB [imitating MaxieC's voice]: "Can I put my ass on it?"

Me, CherkyB [imitating MaxieC's voice]: "Well, how about if I just put one ass cheek on it?"

Me, CherkyB [imitating MaxieC's voice]: "Well how about if I just put my ass crack on it?"

Me, CherkyB [imitating MaxieC's voice]: "Well, how about if I sit in front of it and just lean my ass back up against it?"

A few minutes later, MaxieC tried out a sentence with the word "ass" in it.

Me, CherkyB: "Watch your mouth there, cowboy."

MaxieC: "But you said it a minute ago!"

Me, CherkyB: "Yes, but I am a man. It is my job to role model for you the kind of behavior that is expected from a man. That way [pointing at MaxieC] you know how to grow up and be a man, and you [pointing at HannahC] know how a proper man behaves so that you can find the right kind to marry and not end up with a socialist or something."

Me, CherkyB: "Yes, but that has nothing to do with me."

I found it surprising that I only have 9 whiskeys. I have divided them into two groups: on one side, Maker's Mark, Crown Royal, Glenlivet, and Canadian Club; on the other, Jack Daniel's, Seagram's 7, Jim Beam Rye, Bushmill, and Woodford Reserve.

Pop quiz: why have I divided them into these groups?

"OK, MaxieC, you can cast down the driveway, but not at the trees." 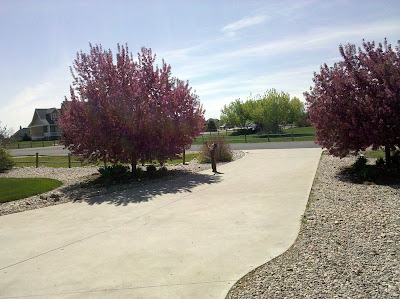 Posted by CherkyB at 9:58 PM No comments:

Christians, as most of you have likely heard, believe that new children should be baptized in order to welcome them into the Fambily of God. This christening involves some sort of liquid - most commonly water, though sometimes scented oils are used - that the child is either moistened with on the head or is fully immersed into. Methods vary.

Well, I attended such a joyous event yesterday. I had not expected to. You see, the day started out like any other Monday - a horrible awakening a half hour earlier than the rest of the week, drive the kids to their Monday-only school (hence the half hour earlier awakening), go to my job, suffer. But instead of going home, I got to go to the end-of-the-school-year musical and theater performance by The Childrens and their little classmates, the precious little creatures that they are.

As is often the case, the thing started late and was a lot longer than one would normally hope for from a school performance. Since buying the Droid, though, these things have been a lot more tolerable, as I can surf the web at 3G speeds and play games during the whole thing. Excepting that my darling wife, whose love knows no bounds for me and for whom my happiness is her driving force, sent me this touching text just as I pulled into the parking lot:

The Mrs.: "I've saved us two seats right in the front row."

The performances went about as well as one could hope. The audio track drowned out the kindergartners' singing, a blessing in disguise I imagine. There were a couple Destination Imagination skits that we were told involved robotics, but the "robotic technology" in the one our precocious little girl acted in was MaxieC's Thomas the Tank Engine alarm clock in a diaper hanging from the end of a Christmas wrapping paper tube that was taped to the top of a box.

After over two hours of this, it gloriously ended with lots of speeches from the director of the school and a couple teachers and the guy who rents the building to them. Then it was snack time. MaxieC loaded up his plate with cookies and brownies and started chowing, HannahC chattered with her giggling little friends, The Mrs. took over the job of Pouring The Drinks So That They Don't Get Spilled, and I stood forlornly in the middle of the room, suffering, occasionally meeting the eye of another poor, suffering father who had to come to this directly from work and hadn't had dinner, and we would give that little nod of acknowledgment and then return to our quiet desperation, all the while wondering how it has come to this.

At some point, I felt something leaning against me, and I looked down to see MaxieC with his look of quiet desperation. I feel for MaxieC, as at least I have the escape of work to get away from the prattling womens. Realizing how I actually came directly from work, and thus I had my truck and The Mrs. had her winivan, I inquired as to whether MaxieC want to, "get the hell out of this place," and I received an affirmative.

So, I went to inform The Mrs. of our escapetude. Of course, The Mrs. responded exactly as you would expect a woman to respond when her husband doesn't want to hang around long past the end of the school program:

Me, CherkyB: "Max and I are going home."

Then one of the teachers handed her a stack of napkins, so she waved me off. Apparently, taking over the pouring of the drinks does not guarantee a lack of spillage.

Once in the truck, MaxieC started whining about having a headache. Then, he fell asleep. About a mile from the house, he woke up and started complaining about wanting to be home right now.

As we turned onto our street, a mere five houses away form home, I heard what sounded like a drink being spilled in the back.

MaxieC: "I threw up again."

Me, CherkyB: "Gaaahh!! Those are perforated leather seats! Try to barf onto the floor cuz I have winter floormats that can hold a lot of liquid."

I pulled into the driveway, jumped out, ran around to MaxieC's door, and checked the damage. There, I found MaxieC with barf all down his shirt and pants, the booster seat covered in barf, the perforated leather seats all covered in barf, and barf running down around the edge and dripping onto the Sony 700W amplifier under his seat. Oddly enough, very little barf on the floormat. Oh, my poor new truck.