Shortly after this tree was felled, The Mrs. decided she hated it because it had some bare spots on the sides. She harshed on it non-stop for the 45 minute drive home. She loves Christmas.

Something Not to Do 22

Let's say, purely hypothetically, that you overhear your wife yapping on the phone with her mother (something that happens two to five times per day), and you hear her say, "He doesn't want to see that! He knows what I looked like then. He knew me when I was twelve." And then, in order to prove her point in some twisted female-logic way, she proceeds to describe in great detail exactly how you dressed when you were twelve.

So you decide to surprise her and dress exactly that way for the next two days, and she doesn't notice at all. Eventually, you break down and say, "Look, I'm dressing just like I did when I was twelve. Just like you described on the phone to someone a couple days ago. Was it your mother?"

"Why were you describing that to your mother?"

"Well, she found these pictures of me when I was twelve, and she wanted to show them to you."

Now, we all know your penchant for inappropriate humor. But take it from me, no matter what you do, no matter how funny you think it will be, do not ask, "Are they topless?"

That, gentle readers, is Something Not to Do.

Labels: something not to do

Having all kinds of troubles with Qik today. The "stop" button isn't responding all the time, so this vid goes on a long time after I hit stop.

Things just don't go smoothly this morning. For some reason, my phone refuses to connect to my laptop via the USB cable to let me copy the pictures off of it. It used to work fine, but now it just spins the "busy" wheel at me.

Oh, there it is. It just took about two minutes of spinning to work. Now you can get pictures.

I haven't tried the Morning Fresh Dairy eggnog that we get delivered to our house yet, but HannahC seems to think it is spectacular. It is spectacularly expensive, at least. There is no expense The Mrs. will spare to get dairy products in glass containers. 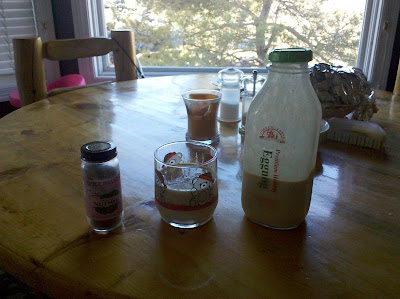 Now for the secret ingredient that will help me weather the holiday. 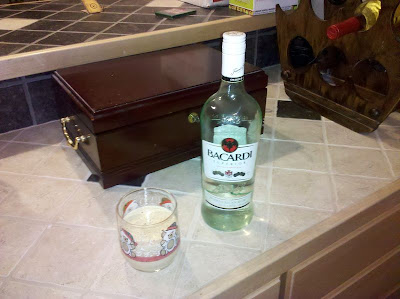 Last night, as I was putting HannahC to bed accidentally late (it was 12:45am, and we had been up watching Kitchen Nightmares on BBC America which I watch because The Mrs. hates it, and thus I can get some peace, and HannahC watches because she's fascinated that someone rich and famous could actually curse that much) and HannahC was again asking the same questions she has been asking for weeks, as she's been unsatisfied with the answers:

HannahC: "So, Waddy, what is Thanksgiving supposed to be about?"

Me, CherkyB: "It's a celebration of a good harvest, just like on that Charlie Brown Pilgrim video thing you just watched. The Pilgrims were happy that they lived through the year and had enough food to make it through the winter."

HannahC: "So, if you had a good harvest, don't you think you'd want to save some of it up instead of just eating it all at a big party?"

Me, CherkyB: "Well, there's a limit as to how long you can keep food, so if you've got more than you can possibly eat before it goes bad, you might as well have a party."

HannahC: "So, it's basically a holiday for making a pig out of yourself."

Me, CherkyB: "There's also the whole 'being thankful' part. You're supposed to think of something that you're thankful for and celebrate that."

HannahC: "What are you thankful for Dah?"

Now, you have to realize that I've had this exact conversation at least once a day for the entire month of November, and I have a hard time taking anything seriously (especially insipid pap like being thankful for great friends and blah blah blah), so I responded ChrkyB style. I farted.

Me, CherkyB: [farting] "I'm thankful for the richness and depth of my farts." 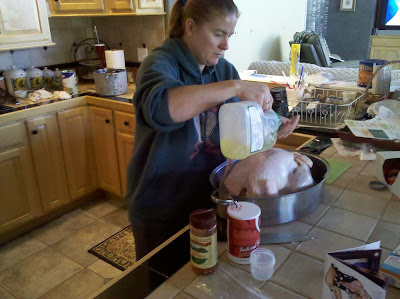 We'll be sitting down for appetizers (instead of lunch) now. 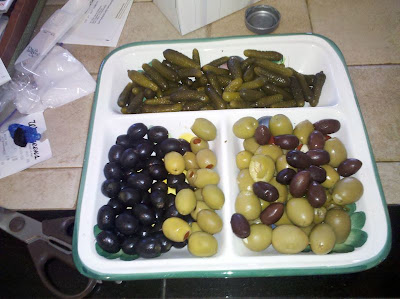 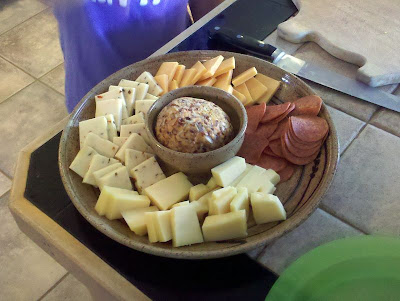 Now Qik is acting up. I shot another video, but it won't embed properly.

OK, now it works. Qik servers may be overloaded today.

I'm surprised no one as asked about the weather. It's nice. I uninstalled and reinstalled Qik to see if that would fix the stop button issue. I dunno if it did, as my phone rebooted while I was shooting this time. That's why it ends kind of in the middle of a sentence.

The Stop button worked this time.

It's sad, really. I posted one video to Facebook, and it generated two comments and an phone call, whereas the old blog here has nothing. No wonder I've only made $25 off my ads in the last 10 months. I should probably post stuff more often to try to build the readership back.

Deal or No Deal is so stupid, yet it's the only thing on right now. Angry Thespian had the game cracked, IIRC. I wonder what ever happened to her. She's probably a TSA screener now.

We've been having a debate about this year's Christmas tree. We normally go to a tree farm in Greeley to cut our own tree down, but this year (a) I have a broken collarbone, and (b) the trees were all picked over pretty badly the past two years with last year's tree being horrible. We go the morning after Thanksgiving (which is when they open), so it's not like everyone got there before us. They're just pretty much out of trees taller than 4 feet.

The Mrs. has been making noise about getting an artificial tree. To me, that's just a sign you've given up. We're going to try a different Christmas tree farm this year that may or may not have been recommended by a friend. We're pretty sure this one is the place she's talking about, but she said a different (nearby) city. There are only two Christmas tree farms in that whole county, the other of which is the one we regularly go to. So this has to be it. Check for photos tomorrow.

Checked statcounter. The only person who has read this so far is The Mrs. Probably cuz everyone else is busy checking Facebook...

It's possible the Cowboys might be good enough to beat the Bills. Not for sure, though.

Damnit, I made coffee, and now I'm out of Irish.

HannahC just brought me this month's Car and Driver and asked if we could send the $1 coupon for Camel Dip to Uncle Locksmith for Christmas. She's so thoughtful. I told her no. Aunt Ellie would get mad, and we all know how fragile Aunt Ellie is. Plus, Aunt Ellie's FB friends would disapprove as well, and that would be quite embarrassing for her.

I just noticed that I have 4 people "following" my weather blog, and I have no idea who any of them is.

Our sink garbage disposal just died. It gave off a smell that we refer to at work as, "letting out the magic smoke".

Yeah, we're gauche. We turned on our Christmas lights Tuesday. 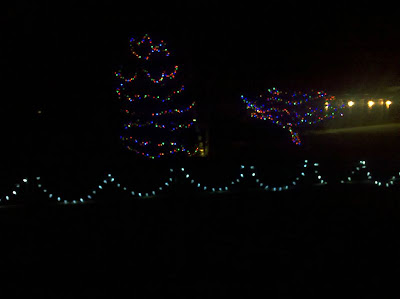 That seems to be it for today. Settling in to go to bed. Tune in tomorrow for Christmas Tree hijinks.
Posted by CherkyB at 10:58 AM 1 comment:

As you all know, given the very frequent posts I put up here, I've been nursing a broken collarbone for about 4 weeks now. It's on my right side, and I'm right-handed, so this has put quite a crimp in my ability to do all the stuff I normally do. The Mrs., on occasion, has been called upon to help with things I normally would do. Needless to say, while she's been quite a trooper, she hasn't lost any of her charm:

Me, CherkyB [trying to unload items from Sam's Club shopping cart into back of winivan]: "Ow."

Me, CherkyB: "Yeah. A lot more than I expected it to."

The Mrs.: "Here. You just stand there and hold my purse."

I've never been so insulted.
Posted by CherkyB at 10:14 AM No comments: