One week after making Pipe #1 ("Toilet Pipe"), I took a crack at pipe #2. This was also a bent ebauchon pipe kit from Vermont Freehand.  Again, I'm just going to show some photos at different stages of the build and not try to teach you how to do it, as I barely know myself at this point.

In the spirit of continuous improvement, I decided on three goals for this pipe:

Here's the kit as it comes from the shop: 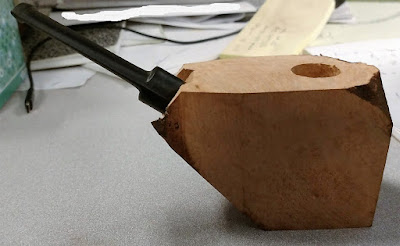 Note the beautiful bark plateaux down the front right corner, the preservation of which was design goal #1.  However, also note if you click on it to see it full size, how the front left corner is not that nice-looking but also would need to be preserved for symmetry. 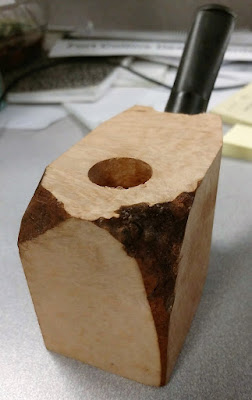 One of the big time-savings methods I applied here was to go from the band saw directly to the 4" belt sander and sanding disc rather than messing around with a bunch of wood files.  You can see how I've sanded down the shank to match the diameter of the stem, achieving design goal #2.  I spent a lot of energy worrying about being off-center on the air bore and accidentally sanding through it, but if you take breaks and put something straight into the bore (I used a nail), you can draw where the air bore is to guide you.  Though the pencil keeps getting sanded off, so you have to do it at regular intervals without taking off too much material between sanity checks. 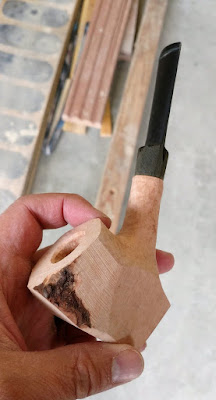 I didn't want a pipe that just looked like a big rectangular block, though preserving the bark meant I could not really do anything traditionally round.  I made the top heptagonal - basically an octagon with the back side (where the stem is) missing.  I chamfered the lower sides in below the plateaux.  Then, it still looked to slab-like in front, so I used some files to carve a V-shaped notch into it. 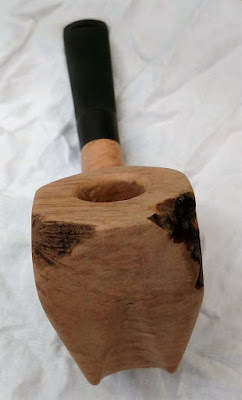 Here is the completed pipe.  I finished it similarly to pipe #1, with layers of burgandy and tan, and I rubbed them out a bit with rubbing alcohol, though not too aggressively as it has a tendency to remove a lot of stain.  I'm pretty happy with how the stem and the shank mate on this one compared to on the first pipe.  That was a definite improvement. 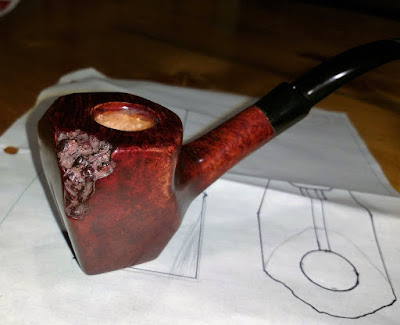 The plateaux looks OK.  One side looks great, with the stain darkening up and accentuating the irregularity of the bark. The other looks like I forgot to sand out the tool marks. 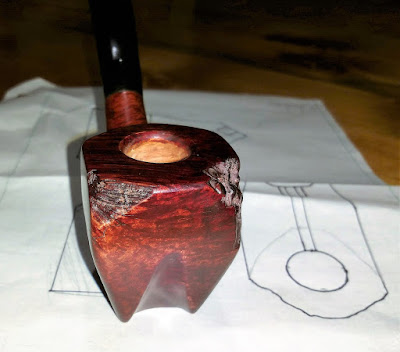 Total build time for this was just five hours.  Up close, you can tell that I cut too much time off the finish sanding, as there are noticeable sanding scratches that I didn't get completely out, and it just doesn't shine like pipe #1.

If you look at the front of this pipe, my always-supportive family decided it looks like someone's behind and legs, so they christened this pipe, "Butt Pipe."

Now, let's talk about what went wrong with this design.  Unlike Toilet Pipe, I smoked this pipe.  It smokes terribly.  There are two main problems, both of which stem from the decision to preserve the plateaux.

First, you immediately notice how heavy it is.  It's just uncomfortable to hold the stem in your teeth given the giant block of wood hanging out at the end of the stem.  The angular design also makes it uncomfortable in the hand.  So there's no really enjoyable way to smoke this pipe.

Second, the tobacco chamber is much too deep for the diameter.  This block of briar really needed to be brought down in height to a more manageable depth-to-diameter ratio.  We're looking at a bore that is over 1.5" deep, and only about 3/4" in diameter.  It's hard to keep lit, and it's hard to get a flame down in there to light it if it goes out.

I learned a lot on this pipe, so the process of making it was definitely worthwhile, but as a functional pipe, it stinks.  Happily, its the only pipe I've made so far (out of a total of 6) that was basically just a piece of furniture.