Yes, that's right folks. You heard it here first. Except for those of you who heard the story earlier.

It started out innocently enough. My Goombah, Mugsy, asked me to go rifle-shootin' out at the range on account of how he wanted to shoot his new AR-30 at 200 yds. Well, given that I'm on sabbatical, I couldn't say "no." Plus, I wanted to shoot my new belly gun with the special Speer Gold Dot short-barrel +P personal defense ammo I had picked up for it.

I decided it'd be fun to shoot my old elk gun that I bought on the spur of the moment when I went to a gun show with a co-worker who wanted to buy a .22 rifle (I ended up buying both a .22 rifle and a .300 Win Mag rifle, and my coworker bought nothing). I had an old friend who had been asking me every year to go elk hunting with him, so I just bought the rifle so's I could go.

And the closest we got to an elk was that we had to wait for some to cross the road before we could get to the national forest.

But that's another story. One that happened 11 years ago.

Now, me being Me, CherkyB, I bought a really nice scope for the rifle - a Leupold Vari-X III of some sort - and I had dutifully gone to the range to zero it in and learn how to shoot a rifle. I had never shot one before, so I bought Jeff Cooper's The Art of the Rifle, read it, and then tried to put into practice what I learned. This went alright until the night before the hunt, when my buddy's dad tried out my rifle and said, "Your scope is out of focus."

And I noticed that, at 100yds, it was slightly out of focus - which it had not been prior to this. I figured despite buying a very pricey flight case for it, United Airlines had knocked something out of whack. But not to worry, as these scopes come with a lifetime warranty. I'd just send it back, and they'd re-align it or whatever.

Except I never did.

In fact, I'm not at all sure I ever shot that rifle again after the elk hunt until this past Sunday. Now, I kinda have a recollection of shooting it once after the hunt, but I can't really put my finger on when that would have been. I think it's just been in the safe the whole time, with me cleaning and oiling it maybe once every couple years to make sure the bore doesn't rust.

So, at one point, Mugsy and I switch rifles, and the AR-30 is one hell of a sweet gun. Virtually no kick, despite being .338 Lapua Mag. As I was looking through his scope, I was thinking to myself, "Self, wow this is a clear image." Then I went back to my gun, looked through the scope, and said, "My scope is out of focus."

Well, today I had a little time on my hands, so I looked up the tech support number for Leupold, then I got the scope off the rifle to look for a model number and serial number before calling it in. And then it went like this:

Me, CherkyB: "Self, I can't believe that people would make such a fancy scope with fixed focus and no way to adjust it. And now, I'll probably have to find the original receipt to get it fixed, and they'll probably say I damaged it and won't fix it for free."

Me, CherkyB: "Hmm...what's this knurled ring next to the zoom? I thought that was part of the zoom, but it doesn't turn when I zoom."

Yeah, that's right. That knurled ring actually was a lock ring for the eyepiece, and when you loosened the ring, the eyepiece could be rotated. Which, yes - you guessed it, adjusted the focus.

I think it’s the parenting that will kill me.

Not that this is unexpected.

As almost none of you know, since I’ve never spoken of it here and only briefly mentioned on that killer-of-blogs, jumper-of-sharks Facebook platform, I am on sabbatical.

“What?” you mouth slowly to yourself, in that confused fashion you’d think by now you’d be used to, given the propensity of confusion swirling amidst your life, “I didn’t know CherkyB was an academic. I thought he, like, did stuff.”

For once, you’re right. I am not an academic, though “do stuff” is probably more than I’d like to commit to with respects to describing my job. For almost the past two years, I have been able to tell people that I am a “Power Architect.” Then, I get a blank stare and maybe a, “So you have a background in construction?” and I realize that, while being a “power architect” is an excitingly snazzy title compared to my previous one of “binsplit guy”, I’m still not really ready for the cocktail circuit with either of those titles.

Not that a proper title would, per se, make me ready for the cocktail circuit, as I can’t for the life of me pretend that socialism is the proper order for a sophisticated society rather than the evolutionary dead-end that it obviously is to anyone whose aspires to more than living off other people’s money. But I digress.

I am not an academic. I work for The Company. And one of the perks of working for The Company is that every few years, they give you a couple months off as a “sabbatical”. This has been a long-standing policy of The Company that started back in the days when it was a new and cut-throat industry, and you had no idea which companies would make it and which would not, and so you worked day and night to try to just stay alive. Thus, the danger of burning out was ever-present. Nowadays, it seems we have our act together pretty well and can accomplish substantially more without burning out, yet the sabbatical lives on as a time-tested tradition in much the fashion that we thought having The Company dump a large portion of money into our 401(k) every year was. Right up until they dialed that way back.

Today is officially my first day of sabbatical – my second sabbatical – but it comes on the heels of a 4-day weekend. So I’m already on my fifth uninterrupted day of family time, and I’m tired. The Mrs. Decided I should take The Childrens to their swimming lessons today so she could stay home and clean the house. This after I nearly died yesterday after sitting on the floor of the living room, which was the only clear space in the whole house, to go over the Colorado Big Game hunting regulations handbook with HannahC and was overcome with dust allergies that caused me to sneeze and cough and my eyes to water for about three hours until I could find the Benedryl (it was in with the dog’s medicines, of course). Apparently, that particular carpet has not been vacuumed since we took the Christmas tree down in January.

I used to vacuum a lot, but I have a rule that I won’t vacuum any room where I can’t see the floor. So now I don’t really ever vacuum. The Mrs. actually moves the vacuum around from room to room so that it’s in a different place every day when I come home from work, but she’s recently admitted that she never actually turns it on cuz she can’t vacuum a room where we can’t see the floor. She puts it in a room as a reminder to herself that she’d like to vacuum that room as soon as The Childrens pick up all their junk, but then she makes HannahC work on 4H projects all day long and makes MaxieC watch TV and play Playstation all day to keep him quiet so HannahC can work on 4H, and, well, not much progress is made on the floor thing.

I’ve only managed to go fishing once so far. I caught a single Bluegill. HannahC caught about 11, of which 6 were big enough to eat. It was one of those days where every time I went to put my line back in the water, HannahC would come romping up with another fish for me to clean, so I didn’t get to fish much during the peak catching time. We were there for about 2.5 hours and caught all the keepers in a span of about 20 minutes about 45 minutes after we got there. Then, nothing.

HannahC was using new high-technology bait - worms that have been fed something that makes them fluorescent green. Now, I don’t know if they are the glow-in-the-dark worms that I’ve seen at Sportsman’s Warehouse. We’ve been meaning to check each night, but always forget. These were from Walmart, and they cost about double what non-fluorescent green worms cost (which means they’re $3 for 12 instead of $3 for 24), but they’re big crawlers that you can cut in half before baiting a hook. I’m not at this point willing to declare that the fishies love the green worms more than regular worms, but they sure love them more than a Mepps Aglia gold spinner with a Berkeley Gulp Alive minnow trailing on the feather-dressed treble, which is what I was fishing. Scientifically formulated attractant that fish can’t resist, my ass.

Lure Researcher: “I’ve come up with a breakthrough formula of pheromones and long-lasting scents that promises to be the most powerful attractant the fishing world has ever known!”

Lure Researcher: “And I’ve slightly changed the formula of our slow-selling plastic swimbaits so that they can absorb the stank and stink for hours.”

Boss: “How does it do versus worms?”

Lure Researcher: “And we can sell them packed in little jars with extra liquid so that you can re-charge the swimbaits after you use them.”

Boss: “But does it work better than worms?”

Lure Researcher: “Yeah, you know, it’ll depend on the individual fish, but yeah, probably.”
Boss: “How about them green worms?”

Boss: “Aw hell, them green worms is cheatin’. Ship it.”

Around these parts, a “keeper” bluegill is only 6-8” long.

On an unrelated note, I’ve decided that for my upcoming birthday, I’m going to get me a high-quality fillet knife. 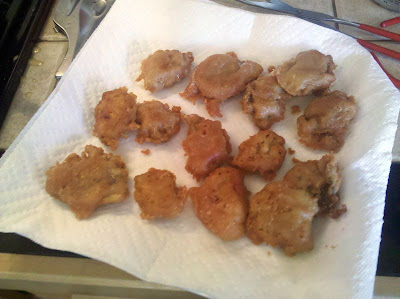