The World's Most Over-Engineered Compost

OK, not really. But it did cost close to $500 in materials and take two days to build. Would you expect any less from Me, CherkyB?

It all started back in San Schmose, where I built a rather nice compost bin out of redwood posts and that synthetic decking material that looks like Trex but is a lot cheaper. Here's a photo of it from this post. 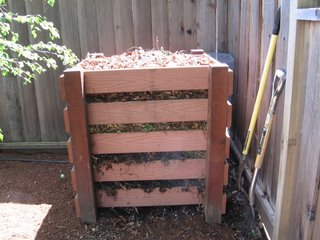 I couldn't believe that I didn't blog the construction of that compost bin, given what a major accomplishment it was. So I poked around a bit and I believe the reason is that I built it pre-blogging. Yes, can you believe it? I actually had some life pre-blogging. And from the way things have been going, it looks pretty certain I'll have some life post-blogging as well.

I started blogging in March of 2006, and a mere 9 days into it, the compost appeared in a couple pictures in what was roughly my thirteenth post. If you count them today, it'll look like the twelfth, but remember that the first one was so bad, I deleted it. Nobody has the very first thing Mozart ever wrote, either. Probably. I'm not really an expert on Mozart, though I saw Amadeus a long time ago, so I know his wife called him "Volfie" and had a big, giant personalities. Or perhaps that was just the style of the dress.

And then I got my glorious chipper. Instead of throwing them out, I chopped up all spring-cleanup yard waste. Now, I had piles of shredded branches and leaves all over the garden plot.

[For those of you who care (given that I couldn't figure this out without literally hours of googling, following nested links to old pdf files, and then contacting the manufacturer), the correct bagger for a 2006 Husqvarna YTH20F42T is now the H342SG. They no longer make the YTGTT342 that the manual that came with the tractor specifies, but as far as I can tell (and this was approximately, though not explicitly, confirmed by the Husqvarna customer service rep) they just renamed the YTGTT342 to H342SG as part of a renaming scheme that renamed all tractors and accessories with more "modular" names. For baggers, the key is "H" for Husqvarna, "3" for triple-bagger, "42" for a 42" mowing deck, and "SG" means sloped drawbar (oddly, "SL" means vertical drawbar - I dunno what exactly SG and SL are supposed to abbreviate). The "drawbar" is the back of the tractor frame where the bagger will attach.]

Now I really needed a compost. So, I assigned The Mrs. the job of figuring out what the HOA rules were regarding this. She failed miserably. Basically, she found the name of the "architectural approval" guy, and then called him to tell him I'd call him. But, you know how the saying goes, "If you want something done right, don't assign it to your wife."

It turns out that the HOA will let me do pretty much anything I want with a compost if I keep it under about 6 feet tall. This is a restriction that is relatively easy to satisfy.

The little compost we had in San Schmose that served as the inspiration for this one was capable of holding about one cubic yard. It was 3'x3'x3'. If I'm producing more than that in grass clippings in one mow (albeit, the first mow of the season, so it was a bit longer than normal), clearly this wasn't going to be enough. I planned to make it as a two-bin compost, with each bin 3x3x3.

The Mrs. looked at it when I laid it out with spray paint on the dirt and declared it too small. So I bumped it up to 2 bins of 4x4x3. After a lot of thought, I decided to build a temporary frame out of 1x3's to hold all the posts in place while the concrete set.

I used the bottom of the frame to lay out where to dig the holes, then I made MaxieC earn his keep: 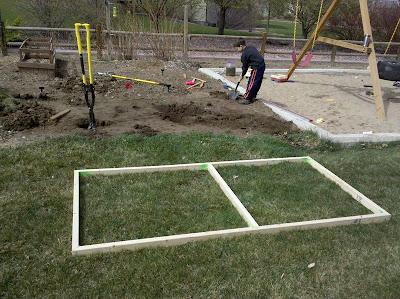 We got everything in there and leveled the thing by adding gravel under the posts. 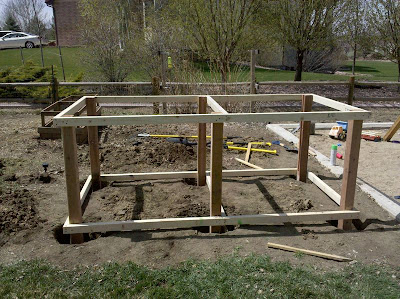 I added a diagonal across the front to keep the posts vertical. The frame had a tendency to rack when left to its own devices. Then, we put fast-set post concrete into the holes and added water. 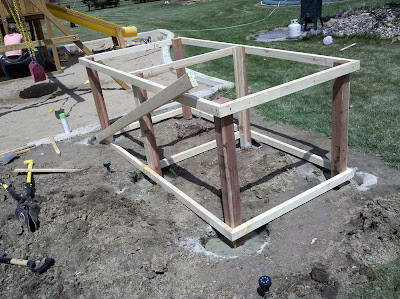 The fronts of the two bins are made out of individual slats that slide down into a groove I cut in the posts using a router and a few passes of a 3/4" straight-cut bit. 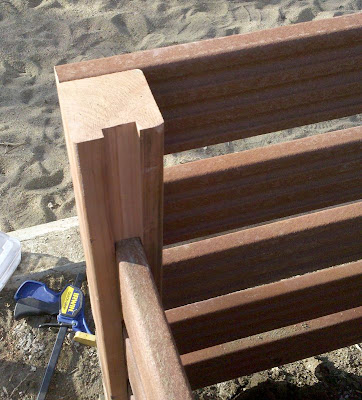 The slats are kept separate with 4" screws left protruding from either end of the slat. This is an idea I got from somewhere, I think it was This Old House Magazine, but I don't remember anymore, though the original didn't drop the slats into grooves in the posts but rather attached a 2x2 down the side slats behind the post to form the slot between the post and the 2x2. 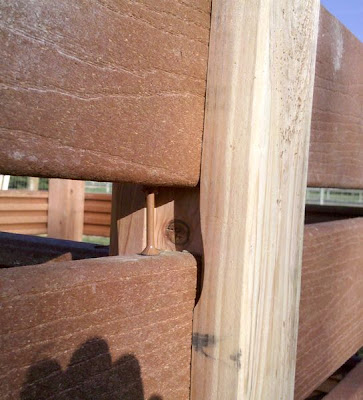 The two bins are separated by a similar slats-in-groove design, only these are permanently held into place with 4" screws shot diagonally through the top of each slat and down into post. The outside slats are just face-screwed into the posts with 3" deck screws. 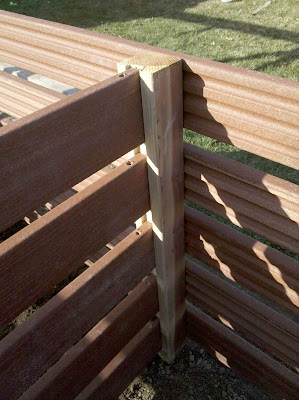 Here it is all done, though it still has concrete dust all over it that needs to get washed off eventually. HannahC was supposed to wash it off with the hose, but she didn't. It has been raining the past three days almost non-stop, so I'm guessing it's pretty well washed off now. 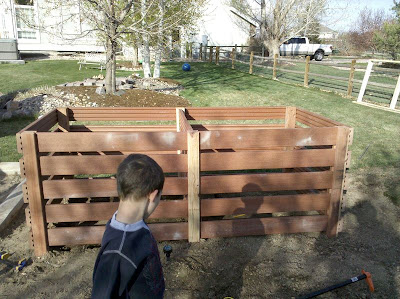 We shoveled up all the yard waste that was in various piles in the garden plot and tossed it in the left bin. We mindfully mixed the dried leaves and wood chips in with the grass to promote fast rotting, and we almost completely filled one bin. HannahC then watered everything down to get it cooking. 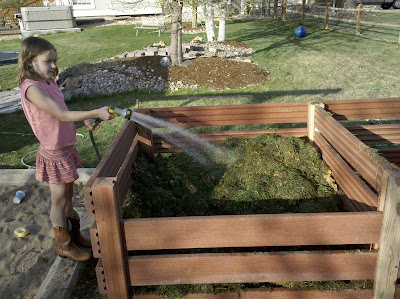 Today, the bin is not even half full. We've had a lot of compression, which is probably just grass rotting. I imagine it will be overflowing with coffee grounds and eggshells presently.
Posted by CherkyB at 8:21 PM 6 comments:

MaxieC: "What does that even mean, Dah? I mean, I've read all these books about stuff like that, and I just can't find what it means to be a 'maroon'."

MaxieC: "Oh yaaaaah! I know about Bugs Bunny. And there's that guy that's always fighting with him."

Me, CherkyB: "Uhhh...sometimes Daffy Duck would fight with Bugs, but I don't remember another guy."

MaxieC: "Yaaaa! There was another guy, and he looked a lot like Elmer Fudd, only he wasn't Elmer Fudd, but he looked like him, and he was"

Me, CherkyB: "ANYWAYS, Bugs Bunny was really a wise guy, but he wasn't super bright. So one time, he was trying to insult someone by saying, 'What a moron,' but he said, 'What a maroon,' instead. So now, everybody my age calls people 'maroons' when they want to say 'moron' but in a funnier way. It's like a tribute to Bugs Bunny."