The Mrs. and Ham

Over a year ago, as happens every year, there was a charity auction at work for the United Way drive. Being that the United Way, if we are to believe my take of the scandalous news reports each year, is an organization that seems to unfortunately employ a rather large number of grifters, I usually don't contribute directly despite the fact that you can now direct your donation to a particular charity.

I'm not sure why I'd need the United Way to direct my gift to a particular charity. If I wanted to give to a particular charity, I'd cut out the middle-man and write them a check (or, as I do with the NRA-ILA (technically not a charity, but working for the betterment of mankind nonetheless) charge it on the old plastic). I think this charity direction business is akin to the "Green Energy" option your electric company may offer you. Electric companies have, by nature, a small amount of their electricity coming from "Green" sources, and they have a small number of customers who are willing to pay extra to pretend they are better than the rest of us by buying "Green" electricity. So they sell the electricity they already had at a higher price to the Greenies so the Greenies can fell smug and superior. With the United Way, a certain small percentage of people designate a particular charity, so they send the money to that charity without graft or corruption, and they just double-dip into the non-designated majority of the donations to line their pockets - oops, I mean pay for overhead. That's just my opinion, of course. A man is entitled to his opinion without being sued. Except in Canada, where freedom of speech does not exist for non-popular opinions.

So they had this auction, and one of the things I like to do in charity auctions is bid below the value price because charity auctions aren't like eBay where everything is guaranteed some level of action. I managed to score a gift certificate to a day spa for $5 less than face value.

Now, that was over a year ago. Why do I bring it up now, and what does it have to do with The Mrs. and ham? I could tell you if you'd stop interrupting and try to quiet down your breathing. Try using your nose. It's really cool how it works. You close your mouth, then breathe.

The Mrs. has a shoulder with tendonitis. She's had a bad shoulder for somewhere around 6 years. Last week, she finally went to the doctor here and got another cortisone shot in it. Then it started to feel fine, so she became obsessed with some "knot" or something she had in her shoulder blade from overcompensating for the shoulder pain. Rather than just let it go away now that the shoulder doesn't hurt anymore, she decided it'd be a great time to use the gift certificate. Especially since I'm on vacation.

So she called up the place a few days ago and made an appointment for today for a one hour hot stone massage. Then they called her back a little later to say that the woman she had signed up with wasn't working today, but they had a man masseur available at the appointed time. Would she be OK with that?

The answer is, apparently, "Hell Yes!" She "much prefers a man to a woman" because "women can't really rub hard enough." With stones. Women can't hit you hard enough with stones?

But, I figure, when I got that one and only massage in my life, I had a woman masseuse, and I'm quite fine with that.

I'm not so happy that the guy was named "Mr. Stephen Ham Hands".

So off she went this morning. Like all spas (and hair salons and any place catering to womens), they try to get you to buy product before you leave. The Mrs. is a sucker for this kind of thing when she's spending my money, so she bought one thing.

Does anyone besides me find the name of this product to be humorous, given that it is sold at a massage parlor? 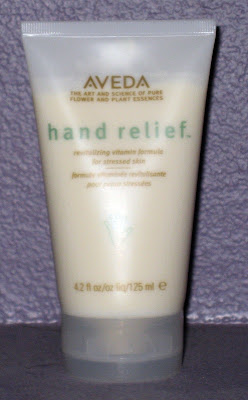 I've been meaning to get a hot stone massage.
one of these days...

Does your hot tub help her with pain?

The hot tub helps, but the hot stone massage was glorious.

I much prefer men too - you are right (Mrs, not you CherkyB), women are not as strong generally. Hot stone .... I've been meaning to try that, sounds marvelous.

^
The sound of CherkyB objecting to his blog being used for us women folk to talk to each other.