Like other members of The Mrs.'s siblingry, somehow Ellie managed to scam a trip out of her employer to come visit us. Something about a "conference" in "Denver."

Naturally, being the fantabulistic host that I am (when I'm awake, at least), I began planning a whole week ahead of time. On our way to Rocky Mountain National Park last weekend, as we entered Estes Park, I said, "Look. There's a riding stable. We should take Ellie horseback riding."

Only HannahC heard me. "Could we Dah? I love riding horses."

I should note that HannahC had never ridden a horse. She had been to pony camp and ridden ponies. Apparently, though, one of them was a "full size pony" whose back came up to, like, her chin. So she referred to it as a horse.

We talked about it every day for the week. The night before Ellie's arrival, I looked up the availability and found it to be good - didn't seem to matter what time I selected on the web page, rides were available.

HannahC happened to ask her mother if we were taking Aunt Ellie horse riding, and got a flat response of, "No." The Mrs. later claimed that this was the first she had ever heard of this scheme and had thought that HannahC had thought it up all by herself.

HannahC later took full credit for thinking it up.

However, Ellie has this Dude Ranch fantasy, where she goes to a dude ranch and enjoys herself (yeah - that's the fantasy part). Now her loving husband does not have this same fantasy, so I figured that for the good of their marriage, she should try to get some of this out of her system whilst here in Colorado.

Plus, I'd never ridden a horse despite listening to country music for years and owning a pickup truck, albeit a small one.

So we packed our sorry butts back up to Estes Park this Saturday to hit the riding stable. These folks have a nice bunch of land on the side of a mountain that they've put a bunch of trails on, it's quite picturesque, and the prices are pretty reasonable.

We paid our money, signed our wavers, and picked out helmets. Then there was a bit of milling around while they put together a few more riders to fill out the group. We went out to inspect the rides, as they were all lined up in a row. The first two horses were substantially larger than the rest of them - a good foot taller, I'd say, and with very large hooves. The first one was a bit skittish, but the other one was calm and friendly. We pet it a bit.

Then the cowboys came out to tell the women and children to choose their steeds. MaxieC decided it was too scary for him to have his own horse, so he rode with me (which save $35). I didn't get to choose my ride, as those two big, giant horses were reserved for double riders. A nice German lady and her son Max got the calm, friendly one.

I got Bam Bam. Bam Bam was so tall that the stirrups were almost at shoulder height. They brought out little steps to help poor old me climb up on him. He was the biggest horse I'd ever seen that wasn't pulling a beer wagon. 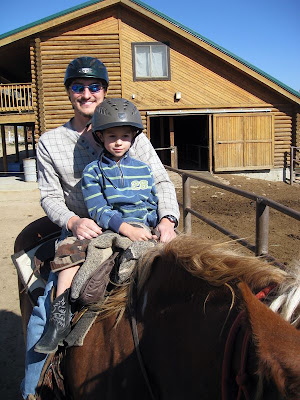 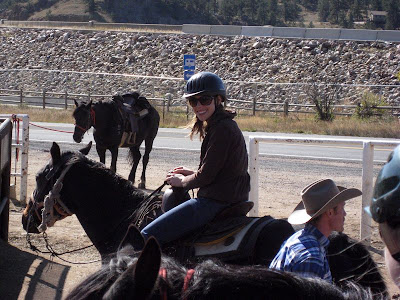 The Mrs. picked out a cute little painted horse whose name I don't remember. 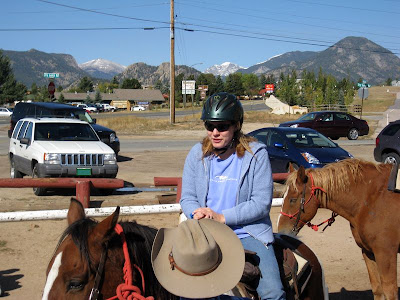 And to round it out, HannahC got a friendly little dark brown horse whose name I also do not recall. 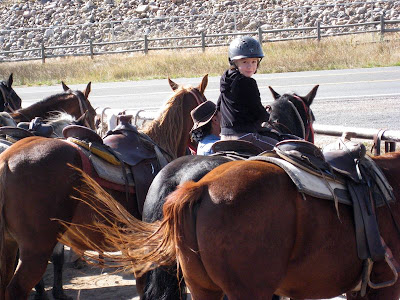 HannahC had a long chat with our guide, Levi (in theory, not a fake name), in which she learned that he had been a karate instructor in San Schmose not too far from where we lived before moving to Colorado to become a cowboy. All the ladies had a thing for Levi. 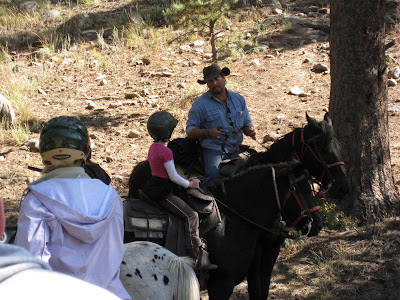 That's Long's Peak over Lake Estes. A scenic overlook. Lake Estes was created by putting a dam across the Big Thompson River. The snow was new - having fallen roughly Wednesday. 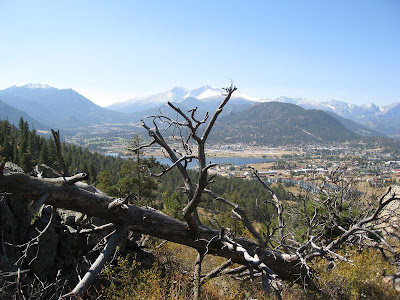 We rode for a bit over two hours. You would not believe how much biotching went on afterwards about being sore. I, oddly enough, didn't feel all that sore. I just felt like I had sat on my ass for two hours while I was carried around. MaxieC, on the other hand, gave me all kinds of graphic descriptions during the ride of what he though the saddle horn was doing to his "nutsack."

Sounds like a good time was had by most!

You and MaxieC both look so happy that I am going to refrain from the smart ass comment I was going to make.