[I'm just updating this post to correct a couple error's The Mrs. pointed out, since I recently answered a blog survey, and one of the questions was "I publish correction to factual errors..." and I chose "always". That's part of the Certification of Truthfulness that you get from Me, CherkyB that you don't get from any other blog. As far as you know.]

Since dear Ellie has claimed that my posts focusing on guns and koi ponds are just too boring to move her to click ads (which is an odd claim given that she never clicked ads in the first place), and many have suggested that gardening has so much more usefulness to the general advertising-clicking populace, I'm going to dedicate this post to garden documentation.

Our garden is about 1000 sq. ft. this year, which, as it turns out, is the square footage limit for trailers at most RV parks. I discovered that by Googling "double-wide square footage" and then following this link. See, I was going to say, "our garden is about the same size as your average double-wide," but then I realized I had no idea at all how big a double-wide was. Since it was pretty late on the east coast, I couldn't just call up any random relative of The Mrs. to get the answer, so I had to settle for Google.

So our garden is about the size of an average park model double-wide.

Oddly, I bet that isn't news to most of my readers like it was to me.

This first shot captures most of the garden. I couldn't fit the whole thing into one frame, as the back part of it becomes a long, narrow strip along the fence that runs for about 20 feet to the right of this shot. You can see the planting boxes HannahC and I built last year in the middle of the picture. They're empty right now, but I think we plan to put carrots and lettuce and other things that bunnies find irresistible in them, since they have anti-bunny covers. You can also see the 1/2" drip supply running around in the foreground. Only the staked out areas that have the white string around them have been planted so far. 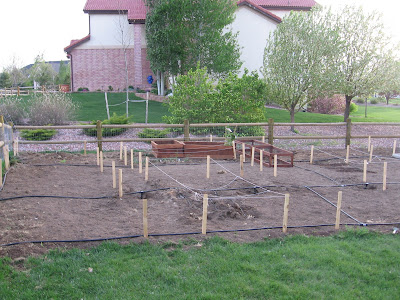 Now, I'm going to put on a clinic in 1/4" drip irrigation. This first bed is onions, shallots, and garlic. You're not supposed to water shallots (I don't know why - I just do what The Mrs. tells me to do), so the near end is unwatered. Here, I am using "soaker" line that is made by embedding a 1 GPH pressure compensated dripper every 12" along the line. This is a new kind of soaker line for me, so I'm very interested to see how it works out. 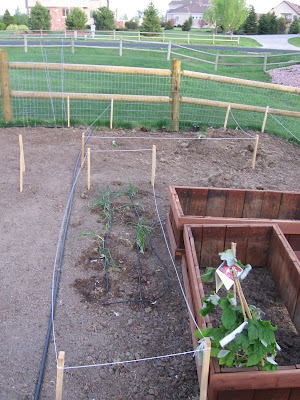 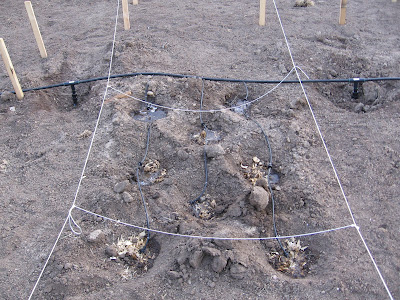 Here is the bed I hooked up last night that was the subject of this post. I believe these are sugar snap peas, given that The Mrs. listed in a comment to that post everything that was planted, and the peas were the only thing that I didn't know the location of. For these rows of seeds, I have used 1/4" recycled rubber soaker hose. This stuff is the only soaker hose that leaves no gaps, so it's great for rows of seeds, but it also degrades very quickly in the sun and is subject to uneven watering from the supply end to the far end due to a complete lack of pressure compensation or evenness of porosity. 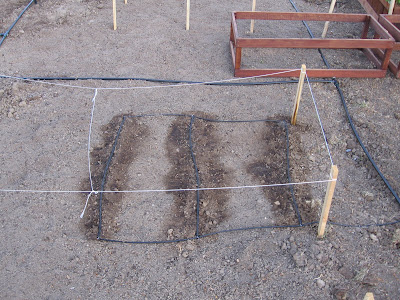 This is a perennial flower bed. I've snaked through this bed the third, and final kind of soaker line I have used on this project - laser cut soaker line with the holes every 6". This sort of splits the difference between the compensated dripper line and the recycled rubber line. It has the holes closer together than the pressure compensated line, and the holes are very uniform owing to them being laser cut, but the lack of pressure compensation can mean uneven watering from end-to-end. I've only run these about 30 seconds in this picture - just enough to check for leaks - as I had just hooked it up, and the regular watering cycle was going to kick on in another 10 minutes. I had good luck with this line watering Irish moss groundcover at my San Schmose house, so I know the watering will spread horizontally to fill in most of the gaps once it is run for 10-15 minutes. 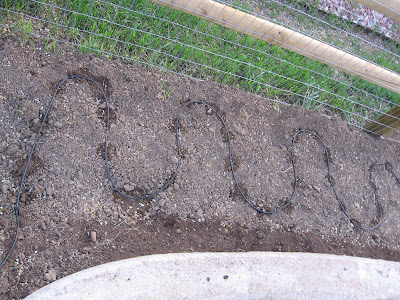 Here along the fence is the strawberry bed. Eight little plants all in a row. Strawberries send out little runners that drop roots when they hit the ground and create new plants, so in about 2 years this will be completely filled in. Strawberries like to live on a slope, and this is the closest thing we have to a real slope in the garden. Here, I have run one 1/4" supply line to every two plants, and I have put a T in the line to run a 1 GPH pressure compensated button dripper for each plant. Way in the back, which you can barely see, are the eggplant and butternut squashes. Those are water with naked 1/4" line for which I have adjusted the flow rate at the "octopus" drip line controller head. 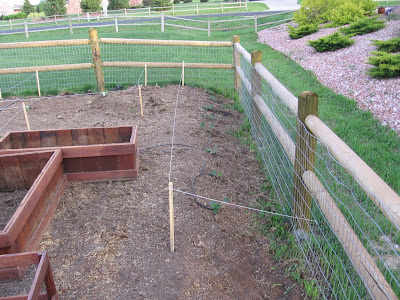 It wasn't that your post was boring (albeit somewhat true), it is that the ads these produce (koi pond?) may not be of interest to most.

It's butternut squash. We'll plant the zucchini and summer squah from seed in their own spot - all mixed together so it's real purty-like.

You don't water the shallots. Garlic gets watered. And strawberries like a slope in cold-winter climates - the cold air is supposed to flow away from the plants.

Instead of taking time to dig up your beautiful lawn (to the chagrin of your neighbors?) you should be finding a spot to put the manufactured mobile home for Fat Moother - She is partial to the "Islander". zvtuic

You two are amazing!!!
I haven't a clue...
So will you use all that grows?

Probably we will use most of it. That's the advantage of planting a little bit of a lot of things instead of 15 tomato plants. I expect the bunnies will eat more of it than we will, though.

That is an amazing garden (or soon to be garden). I am jealous. I used to garden, back in the day. I miss it, but I have no time to garden anymore and our lawn is not well suited to a garden, although I have put in some herbs here and there.