And so it ends

At long last, the trampoline project is concluded. It took me all day yesterday plus a couple hours today, but it's finally, finally done.

And not a moment too soon. I was beginning to hate the trampoline.

So, at some point I'll get these photos into the trampoline project page, but for now I'll just put them here. That way, I don't have to detail all the actual work in a step-by-step format.

What I did for most of Saturday was to built a custom-fit ring made out of plywood around the lip of the retaining wall in order to fill in the gaps between the dodecagon wall and the circular trampoline. I did this using 4'x8" planks of pressure-treated plywood cut from a 4x8 sheet. 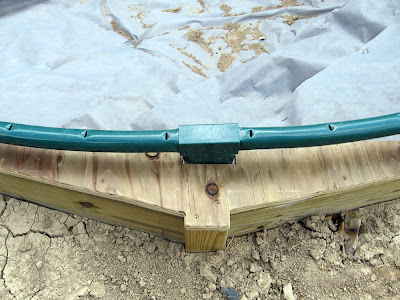 I got to use my saber saw, my belt sander, and my router. All tools I had not gotten to use yet in this project. It got me to thinking about whether there were any power tools I owned that I didn't use in this project.

The answer is yes. I didn't use my narrow-angle drill, my palm sander, or my old 14.4V drill that doesn't hold a charge anymore and has been replaced. Other than that, I got everything out. 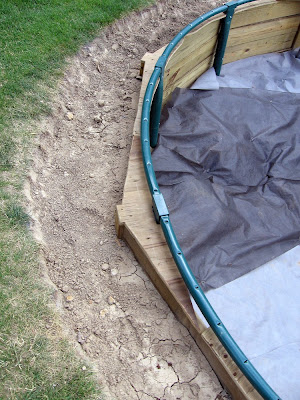 Those of you who have an interest in the weather already know about this gap. I had declared victory yesterday even though there was this gap, but the victory was short-lived. The Mrs. insisted it be fixed. 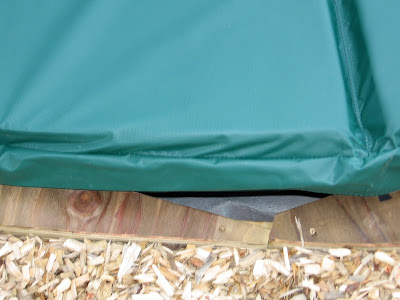 So I spliced in a patch made from the scraps. It's held in with Simpson strong tie jobbers, a 90-degree joint to the wall and some nail straps to the adjacent pieces. I had to use stainless steel screws, since deck screws don't come this short. Stainless screws cost $0.49 each, making this by far the most expensive piece of the project. 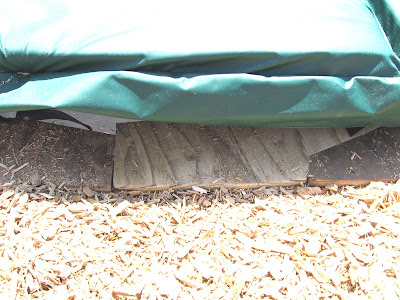 The Childrens helped put the springs all in place. It poured moments later, so we didn't get the trampoline surface in for a couple hours. 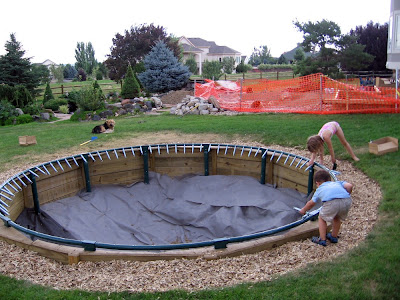 Sunday afternoon after adding a second cubic yard of playground mulch. I bought the two yards from two different places - the first yard on Saturday from a closer place that was closed by the time I had it unloaded and didn't open on Sundays, and the second yard from a farther away place. They both cost exactly the same amount. But the second one was a good 4-5" deeper in the back of my pickup. They used a front loader at the second place instead of a skid loader like was used at the first.

The first place had a drive-up window, though, so I didn't even need to get out of the truck. 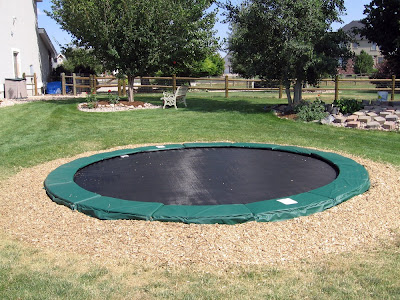 MaxieC takes it for a whirl. 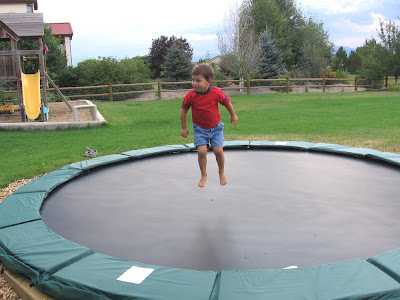 Even me, broken neck paranoid woman, would allow my kid to jump on that.

wow! my husband is going to regret me having ever found your blog! Great Job!

Wonderful explanation.
Didn't sleep last night trying to visualize this piece of work in my own backyard.
Hope to get started this weekend on the same project.

What brand of trampoline is that? I like the green pads as opposed to the regular blue ones.

I was wondering what brand trampoline you have. We are planning on installing ours this summer. I love how well covered the springs are. Great blog!! Thank you for posting all this info.

I honestly don't know the brand. I tried to find the manual for it when the previous commenter asked, but I couldn't (after all - who needs a manual for a trampoline once it is already assembled?).

All I can say is that I got it at Dick's Sporting Goods, and it was their "heavy duty" model, which is good for up to 300 lbs.

So it will take about 6 days!? You did a fabulous job! I saw one in a book I bought at Lowes and now want one! Another project for my husband! Thanks for the tips!

HI there I really love the work you did for this trampoline!

I have a much smaller trampoline, only 6ft. I'm confused about what sort of shape I should make it? There are 6 legs, in 3 sets of 2; so basically the legs are paired with a single bar oining each of the teo legs.

I would really appreciate any help. Thanks!

looks great....question though....one place that i was reading says to sit it 6" above ground for air flow because it will affect bounce. Have you noticed...does it bounce good? i have been wanting to do this for a couple of years now....thanks so much for posting.... i know it took a lot of time...and ur right...not a lot of "how to's" out there!

Fabulous design. Following other ideas from web searches our project would have certainly failed. Can you please come to the UK to do ours?

Hey Brian, this is a truly wonderful design and your directions are flawless. I tried to find a better way to contact you but I guess this will do. I am the owner of a pool service company and wanted to see if I could get permission from you to use some of your pictures for a short 1 minute video on my website. I have a lot of customers interested in Inground Trampolines and some of your pictures would do great explaining/detailing the process. Please get back to me here or better yet email me @ mbradley.services@gmail.com

Thanks in advance. Matthew from South Carolina

This should be fine. I'll email you in the next couple days to discuss the details.

I worry about water accumulating underneath. How is that going?