Another Board in The Wall

[Hey folks, if you're looking for more detail on the inground trampoline project, be sure not to miss the top-level post on it here. It includes a lot of the same pictures, but with some more detailed instructions.]

Saturday morning, I got up bright and early and put in the remaining four retaining wall posts for our inground trampoline project. Then I looked at it all with a great deal of trepidation, wondering exactly how far off you could be if you leveled a web of 6 16 foot mason's lines using nothing but a line level. I never really have good luck with this kind of thing. And I noted how mason's line is not supposed to stretch, yet it sure stretched when the sprinklers hit is.

OK, so I bailed on the mason's line spider and went to the rental place to pick up a laser level. They rent for only $10/hr, but there is an unfortunate 4 hour minimum. I only needed it for about a half hour. I got a self-leveling model with a tripod and a laser receiver. It's a good thing it came with the receiver, as I sure could not see the laser at all in the morning sun. 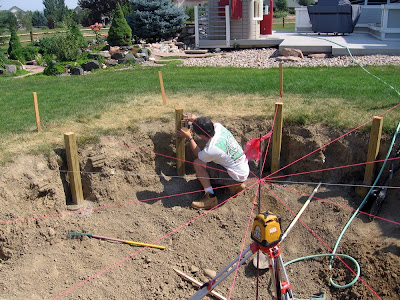 Then I took a "quick" trip to Lowe's to pick up 18 pressure-treated 2x8x8's and 6 2x4x8's. I spent the rest of the day working my way through the process of installing the wall, with each section going a little faster. I got worn out after just 4 of the 12 sections, plus one board. 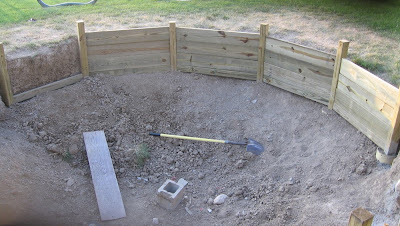 Here, it is now late Sunday. I've been working all day, and I've made two trips to Lowe's already. The first trip was for a new saw blade for my compound miter saw. It started to drag quite a bit about noon, and dull saw blades are just asking for an injury. The Mrs. volunteered to go buy me a new one so I could keep working, but the local Ace Hardware only had an 80-tooth blade used for interior trim work. I needed a bad-ass blade for cutting green pressure-treated lumber. The Mrs. stopped back home on the way to Lowe's, and she invited me for the ride. Man, did I need a break. It was right around 100 degrees at the time. 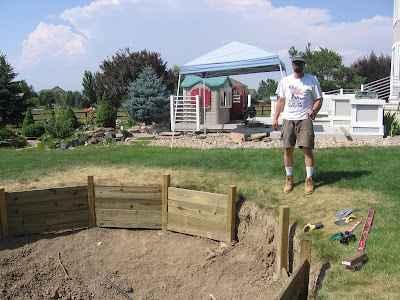 The second trip to Lowe's, in case you're keeping count, was for another 2x4x8. One of them I cut spot on as measured at the top of the posts, except the posts were crooked, and when I got it to the bottom, it was a half-inch short. This also happened to be the shortest span between posts of all of them (my tangled web of 30 degree lines wasn't always exactly 30 degrees). I was quite cavalier in buying lumber - only buying exactly what was necessary with no overage for error - and thus had to make another trip.

A grand innovation was to move the pop-up gazebo over the miter saw. The Childrens had this out all week, but they weren't really using it. BTW, that deck gets ripped out on Tuesday. 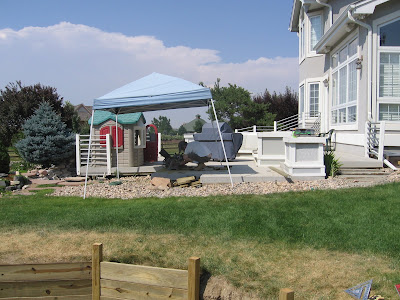 Lookit me! I can carry lumber!

I dunno what this thing is called. Homedepot.com has something they call a "miter saw protractor," but it's hella more complicated. However, it is something I used to measure angles for my miter saw, so it's probably a miter saw protractor. The interesting thing is that I have owned this little gizmodo for probably 4 years now and never used it. I had thought I was going to need it, but then I never did. Until now. 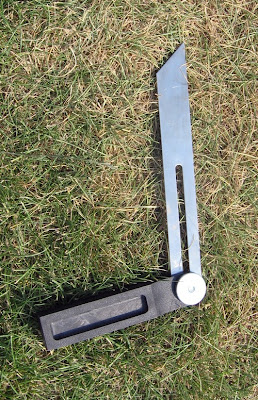 You can see me here suffering in the 100+ degree heat with my personal protection equipment on. That'd be an air mask (pressure-treated lumber sawdust is not to be inhaled), ear plugs, and polycarbonate safety glasses. I'm measuring up one of the last of the wall plates. MaxieC didn't want Mommy to take his picture, it seems. 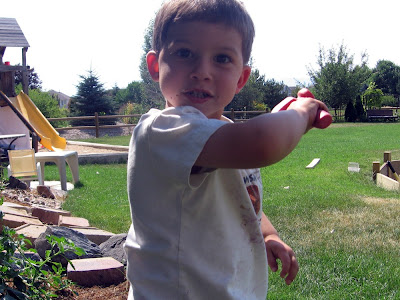 And here I am driving the last screw. I actually had to remove the last screw and then re-drive it for this picture, cuz MaxieC hurt his finger on the fence, and The Mrs. was inside with bandaid kit attending to the horrific injury when I actually finished. I'm still not used to Li-ion battery packs on the drill. The old Ni-Cad drill used to go slower and slower and slower, and then you'd change the battery. This one drives one screw a little more slowly than you think it should, then the next screw it goes about 4 twists and stops. Just flat-out dead stops. The drill is completely dead. Its odd. 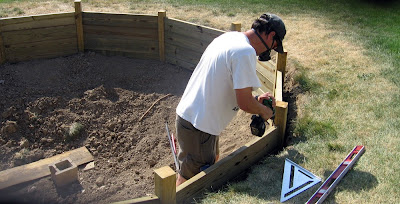 And now it's time for the heavy artillery. 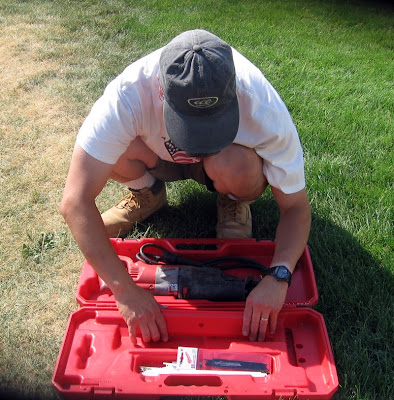 And there it is. All the 4x4 posts trimmed to height with the Sawzall. 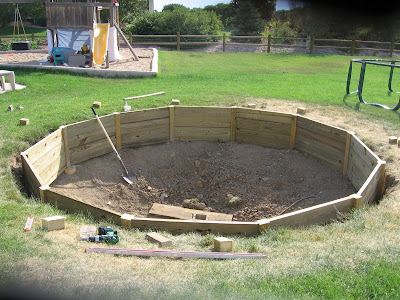 We got some neighbors to come help us drop the trampoline frame in. It fits. Next step is to level it off, which will require a bit of excavating. 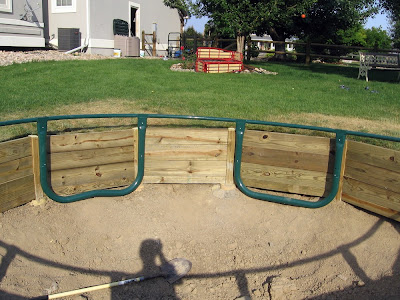 This is perfect for one of those weekend home shows...
It looks terrific!

You do beautiful work! How d'you learn how to do all that?

I learned by watching TV. Those weekend home shows...

What amp is yer sawzall? I am thinking of getting one but I don't need a $300 once. Was thinking about 10-12 amp? pwzhuda

Mine is 11A. It's a "Heavy Duty Super Sawzall with Orbital action." I got it used off Ebay for a little over a hundred. I think it needs new brushes, but it gets the job done.

That the regular Sawzall. I have the Super Sawzall. Means I have higher RPMs as well as double the stroke length. But that one would be fine for most home use.

How do the boards connect to the posts in the trampoline walls?

Greetings:
Do you have a shot of the final project? Also any tips from where you left off? I am doing this on May 7 and could use a lil guidance. You have. by far, the best info on the internet on this subject.

This post shows the final product. The only real difference is that I used plywood to cover the gaps between the wall and the trampoline. I custom cut each one with a saber saw. I ended up getting really busy with other projects and never did a detailed write-up of this step.

Have you seen the top level post on the trampoline project?

If there's one thing I wish I had done differently, it would have been to cut all the wall slats first, before I poured the concrete footings for the posts. Then I could have tacked in the top and bottom slats all the way around to make sure that all the posts were symmetric and vertical, and then set everything in concrete.

This would have saved me a massive amount of time that was wasted because I didn't get all the posts perfectly vertical nor perfectly tangential to the circle. So every miter cut had to be custom fit. If I had done the math ahead of time, and cut up identical slats, I would have gotten a much more perfect shape and probably knocked close to a day off the work.

I should update the directions.