This post will be a work-in-progress for a couple days. Because of the hectic nature of a 4-H build project that involves 10 children aged 5 to 12, a few moms, a few dads, and a few pizzas, and starting at 7pm, I didn't take many pictures during the actual build (OK - I didn't take any). So I'm taking pictures of the completed project, plus I'll backfill with some drawings of the plans as I get a chance to draw them.

The story: my delightful daughter, HannahC, joined a local 4-H club this year. One of the activities that all the local 4-H chapters participate in each year is a fund-raising carnival. For the carnival, each club builds their own booth and designs their own midway-style game. For reasons unbeknownst to me (other than possibly I am the world's foremost expert on building a retaining wall for an inground trampoline), my wife volunteered me to "sit in" on the building committee. The rest, as they say, is history.

The parameters of the carnival specify 10'x10' booths, with the option to get two adjacent booth sites to make a 10'x20' area. The 10'x20' is what the club chose. The requirements from the club were that the design be re-configurable to be a 10'x10' booth, that it be easy to assemble and break down for storage, and that it's budget come in at something like $100-$150 not counting the "decorations".

The design we came up with was to create free-standing poles out of 8' 4x4's with bases and then to connect them together with 10' lengths of steel electrical conduit. We're really just building a frame upon which to hang decorations, not something that needs to withstand the elements (the carnival is indoors). Here's a picture of the completed structure, including most of the build crew. I've pixelated the faces of non-family members because a lot of folks get upset if you put their picture on the web without permission. 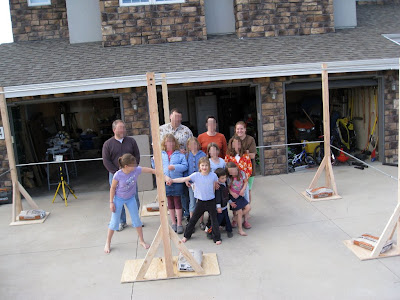 Step one: Preparing the 2x6

You can skip this step if your miter saw allows you to set it to 60 degrees. Chances are it doesn't.

Take your piece of scrap 2x6 and make a fresh, square cut on the end using the power miter saw. You'll need this later when cutting the 2x4's, but once you set the angle for the miters on the 2x4's, you won't want to disturb it until you're complete with all the 2x4 cuts, and you'll need this right in the middle of that. So square it up now. 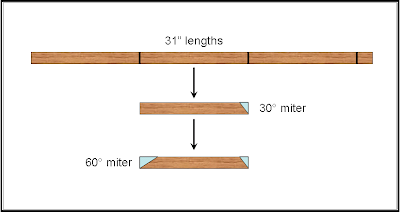 In words:
We'll end up with 15 pieces, and we only need 14, so feel free to screw one and only one of them up.

It's very helpful if you have a saw table that has an adjustable materials stop that you can just set at 31" and then bang out the lengths one after another. I have a cheapie table from Harbor Freight, but it does the job. It was on sale for $70, regularly $90. 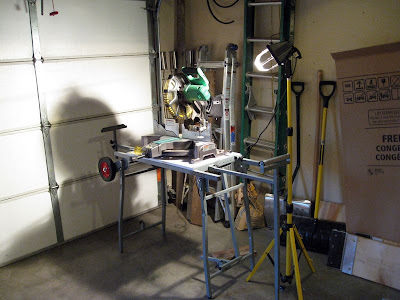 Here's a picture of the 30 degree cut. For you geometry buffs, remember that miter angles are specified with respect to a square end perpendicular to the fence. 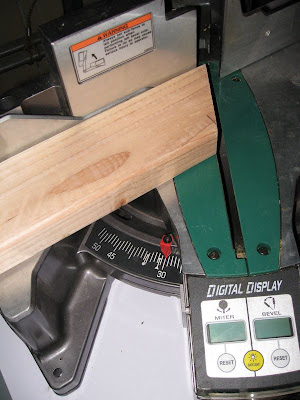 Now, what to in the likely event that your saw can't cut a 60 degree angle. We're going to use the 2x6 board to create a little jig that will let you cut the complementary angle to the one you cut first. This setup cuts an angle that is 90 minus whatever you cut already, so 90 minus 30 is 60.

One of the great things here is that if you were off a little bit on the angle of the first cut, if you don't change the angle of the miter at all, this will produce a cut that cancels out that original error, and that'll make final assembly much smoother. So, say, if you cut 31 degrees instead of 30 degrees, this setup will produce a second cut at 59 degrees so that the sum is 90. You need the two angles to sum to 90 to make the legs fit properly, but you don't need them to be exactly 30 and 60 degrees.

Here's how to do it. Leave the miter angle set at whatever it was for the first angle cut (in our case 30 degrees). Then, bring down the saw blade without turning on the saw. Put your 2x6 up against the backstop of the saw with the fresh-cut end towards the blade, then slide it up to the saw blade so that it is just a hair away from touching the blade. Now, clamp it in place using the miter saw material clamp. 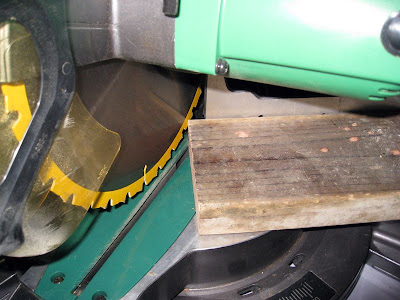 Now, you load in your 31" segments of 2x4, making sure you put the "long" end up against the 2x6. In my picture, that'd be to the right. Don't get it backwards - you only have one extra. Check it twice before you cut. 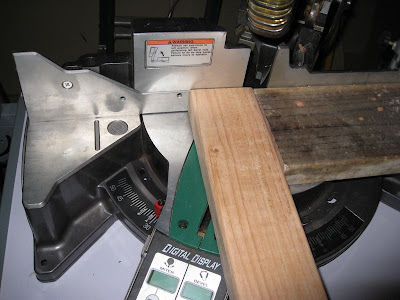 Finally the fun part. Hold the 2x4 up against both the miter backstop and the 2x6 and cut it without putting your hand anywhere near where the cut is going to be. It'll be a little awkward, and you'll be tempted to try to hold the 2x4 by that back corner, but there are very few wood shop tools that'll cut your fingers clean off as quickly as a power miter. Take your time and don't cut your hand off. 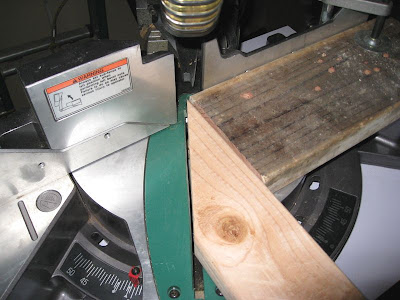 You may note in the above picture that this is a pretty long cut. This is a 12" miter saw, and you can see there's not a lot of length left over to the saw slot. I'm guessing a 10" won't quite do this, but a 10" slider would. If you followed directions, you should end up with at least 14 (15 if you were perfect) of these:

With a hand-held circular saw, it's pretty hard to cut a sheet of plywood in half lengthwise, so I cut it the short way first as shown in this diagram: 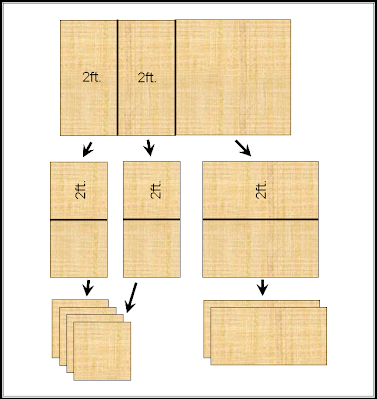 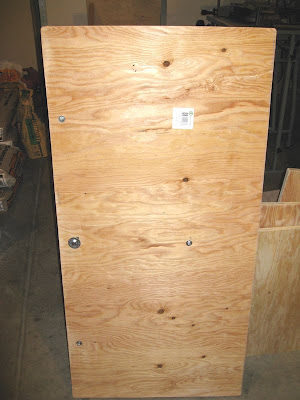 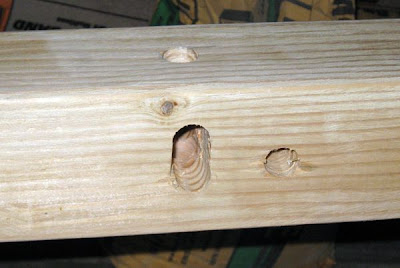 Now, I searching for the best information for Miter saw~~*

and your Blog are very interesting too

Please comeback to visit my blog too : Miter saw

I'm sorry , If you think this is spam. but may i thank you again.