Before I forget, I'm going to open with a funny story. I need to tell this, because it's an instance of The Mrs. being funny. She isn't funny all that often, and when she is funny, she is very, very proud of herself. I need to tell this story now, because she's hitting "reload" on my blog so much looking for the official account of her triumph of humor that she's throwing off all my visitor counters. So here it is:

We were driving along a couple days ago, and The Mrs. was telling me about FreddyC's appointment with the vet to make sure he was up-to-date on all his shots, etc. before The Big Move. I said, "Hey, I learned that one of the guys in Ft. Collins's wife is a vet. I think she mostly does horses and farm animals and stuff." Then The Mrs. says,

"Yeah? But what kind of animals does she take care of in her practice?"

So, there you go. You pitch up a nice slow one down the middle, and The Mrs. swings for the upper deck. The rest of the weekend, every time I said something grumpy, The Mrs. responded with, "She mostly does horses."

Yesterday, we had HannieC's birthday party. Her birthday isn't for another 2 weeks, but The Mrs. pulled in the party so that it would not conflict with an open house. We rented a cotton candy machine and a snow cone machine. Both were big hits. At some point in the middle of the party, The Mrs. comes wandering out with a bottle of sweet-and-sour mixer and a bottle of tequila and says to me, "Time to make some adult snow cones."

See, so every now and then there is a glimmer of why I married her. Here are two glimmers in the same weekend.

We ran completely out of tequila very shortly. It's the kind of liquor I never stock a backup bottle of, since my circle doesn't drink that much tequila, and The Mrs's circle isn't around that much. But, as it turns out, suffering parents standing in the heat at a 6-yr-old birthday party are a ripe audience of tequila cones.

Then we all got in a discussion about how I was going to truck the liquor, along with ammo, propane, motor oil, and other household chemicals out to Colorado, and it came up that it might not be legal for me to drive through Utah with the liquor. I'm gonna have to look that up. I checked the non-Utah route, which heads through Arizona and New Mexico, but it was 300-400 miles longer. I dunno if that's worth the detour, or if I should have a big going-away liquor bash.

Here are some photos from HannieC's birthday party. Our youngest guest, fellow blogger ZachyO, dropped by while his townhouse was having an open house. He needed a little more space, now that his parents moved in with him, so he bought a full-size house. Here he helping his dad take a whack at the Batman pinata. 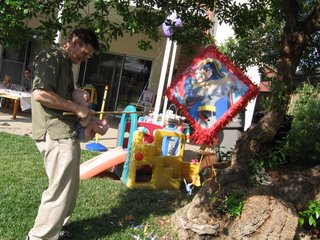 The cake was also Batman-themed, though it's hard to tell from this picture. I don't know why HannieC has suddenly become a Batman aficionado. I guess it's better than Dragon Tales. 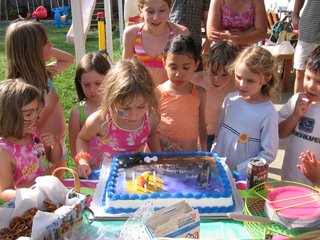 It was hot. The Childrens played first in the Sponge Bob sprinkler, and then in the elephant pool. They turned the back yard into a giant swamp by the end, though it seems to have drained overnight. 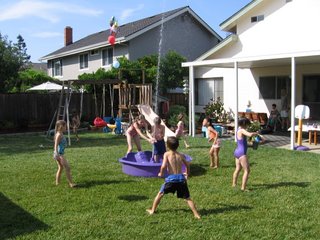 MaxieC plays with his good buddy NolanB, no relation to JohnnyB. This is the only shot we have of him not bashing NolanB over the head with a plastic sandbox hoe. Mainly because we took the hoe away and made him play with the rake. 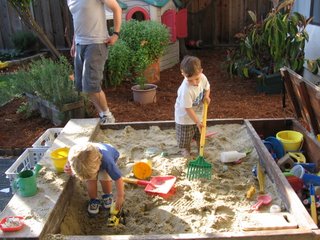 My favorite shot below. I call it, "real men don't need ladders to hang the pinata." 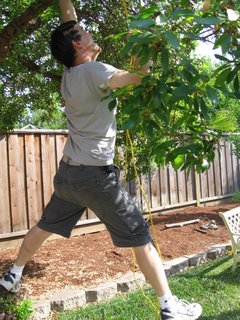 Poor HannieC. She is sooo neglected. Maybe somebody should call the Birthday Party Neglect Pol-eece? zbxsthh