Is it the End of Fat Camp?

Theoretically, yesterday was fat camp. However, when it came time to go hit the trails, it turned out I was the only confirmed attendee. Why is this? Well, it's starting to become clear that I surround myself with complete losers in order to feel better about myself in comparison. Either that, or I'm the only one who isn't all that busy right now.

BrainkyP: I still work until feven o'clock every night
Spankolio: I'm working
TommyO: I just unexpectedly bought a house, and now I have to get my townhouse ready to sell or I'm going to go bankrupt.
AndyP: I'm too important to return you phonecalls anymore.

Thing is, I had packed up my bike and everything figuring at least one of these idiots would show. But no.

I ended up going home, where there was no dinner for me. I had a Hungry Man fried chicken dinner. That was just perfect considering I had had Kentucky Fried Chicken for lunch.

Last time CJ mentioned KFC, he got an ad for it. This was before he got banned from having ads for clicking on them himself. You can't click on your own ads. It very clearly violates the contract. But you gotta read the contract to know that.

So we decided that this week would be fix up the fixtures weekend. See, when we bought our house, it was a mess. One of the things we always planned to do was to change out most of the sink fixtures. I changed out the kitchen sink fixture before we moved in, as the kitchen was "so digusting" that "I can't imagine even touching anything in there." We also changed the double-oven, cooktop, and dishwasher. The kitchen faucet was a realtively painless swap compared to that.

However, at that point, we kinda lost interest in changing the faucets. It's a pain to do, and they were all working OK. But they were old and grungy-looking.

I decided we'd go to OSH to get the fixtures this morning. This is because I had seen one just like the new faucet in the kids' bathroom when we were at OSH last time. One of those faucets had died, and the home warranty people replaced it. But they didn't match the original. So one sink had one faucet, and the other had a completely different one. 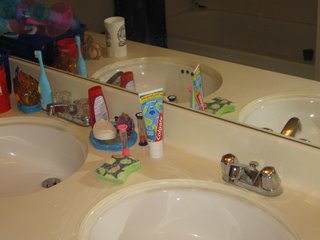 Being cheap, I decided to match the new one (the one on the right) rather than getting two new ones.

Now, as is customary at our house on project day, The Mrs. decided to do something time consuming and unrelalted in order to push out the start of the projects as long as possible, thus assuring that they won't finish in one day. She decided, of all things, that she needed to clean the bathrooms. That way, they'll be nice in clean as I disassemble the fixtures and dump them out on the floor and scrape off all the old putty and caulk and generally make a big mess. See, we had our realtors coming over at 2:30, and the house needed to be presentable.

Whatever, I managed to talk her out of it. She made fun of me for wanting to take a shower in the morning before breakfast as retaliation for not letting her clean the bathrooms before we went to OSH. But still, despite us all being up at at an hour beginning with a "7", we ended up not getting to OSH until around 10:00. I have no idea why. I know I spent a lot of time up in MaxieC's room doing puzzles with him while I thought The Mrs. was cooking breakfast. Then when we came down for breakfast, she handed me a box of Entenmann's chocolate-frosted devil's food donuts. I don't know why it took until 9:30 to prepare a box of donuts. The box wasn't even open. I suspect she was cleaning the toilets.

Anyways, I'm up in MaxieC's room in the morning, and I look out the window. I like to look out his window because I can see what's going on on the street. It gives me hope. Today, though, it gave me consternation. Why? Well, I didn't see the soothing lines of my truck out there. In its stead, I saw a P.O.S. Jetta with most of the paint missing from the roof. 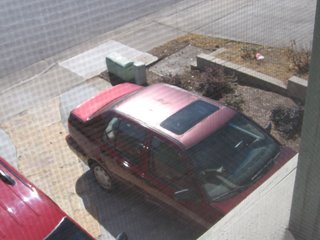 It's BrainkyP's car. I know what you're thinking.

A Jetta? I didn't know BrainkyP was a woman.

Well, he's not. He's just European, so he can't help it. He borrowed my truck to get mulch, and he drove my truck home from work yesterday whilst I drove his car. His brake light comes on if you accelerate too rapidly in first gear, as it turns out.

Now, I'm looking down on this car and thinking to my self, "Self, BrainkyP's car sure is a P.O.S. Why did you park it on your brand new driveway with the flagstone running through it? It's probably out there leaking fluids all over and making a big, nasty mess that will greatly diminish the curb appeal of your house."

Then I was all like, "Hey MaxieC, we've gotta run outside for a second!"

Son of a beeeotch! It leaking fluids all over my new driveway! Mother-f#*ker!

Well, we managed to get off to OSH shortly thereafter. I also managed to put his junker out in the street, though I crossed my fingers that it wouldn't get towed before I got back. The cops were out here yesterday towing a motorcycle (a Ninja 500cc) that was "abandoned" in the street a couple houses over. We don't like that type over on our side of the zip code border.

As always, I did not finish. I ended up making two more trips to OSH, and breaking one thing that I haven't yet figure out how to fix (the brass shaft for the diverter valve in the tub - turns out of the aluminum inside the knob seizes to the shaft, putting a 2' pipe wrench on it to "loosen it up" will, in fact, snap the brass clean off. I knew that before I did it, yet I did it anyways. I couldn't help myself.). I got everything done except one of the two faucets in the master bath. Those guys were a major pain because the sink bowl is quite deep, and they are three-piece sets (two knobs and a faucet, not a knob-faucet combo). I had to remove the sink the get the old one out on the one that I finished. This after spending over an hour getting most of the old one out and failing on the second-last nut on the faucet. Man, was it easy to put the new one in with the sink out. Definitely know I'm dropping the sink out on the next one right from the get go.

Here's a before/after of the downstairs fixture. 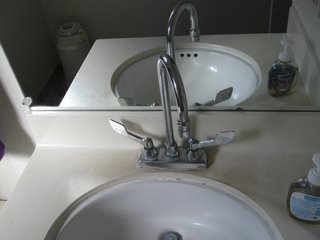 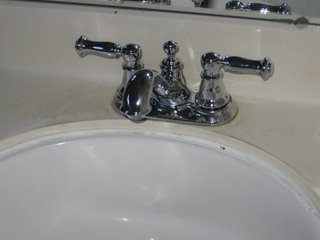 I don't remember being asked about Fat Camp this Thursday.... I was working.. but I do like to "give" the excuse meself.. when it's being attributed to me..