The Devil and Her Eggs

She replied, "Every decent housewife has something to serve deviled eggs in." 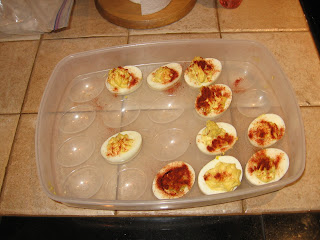 So it got me to thinking. I said that my mother never had one, but now I remember she did. It was a glass plate with some kind of yellow floral design embedded in it that had egg-shaped indentations around the periphery. I poked on eBay, and deviled egg thingees seem to be pretty popular. Anyways, I figured, what the hell, I'd take a survey.

On a different note, here's a little shot I took at the zoo yesterday. It was outside the rainforest building, where they have lots of snakes and fishies and lizards and the like. You are not allowed to take you stroller inside, so there is a giant lot-full of strollers just outside the door. Seems the locals like to take advantage of this. This dude was going down into the baskets of the strollers and coming up with snacks. He'd sit there on the rim of the basket and eat whatever he found, then disappear back down into the stroller for a bit and reemerge with a new treasure. It looked like popcorn to me. 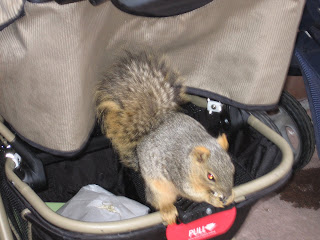 MaxieC is turning out to be quite a showman. Here he gives us his, "Hey, how you doooooin' " look. 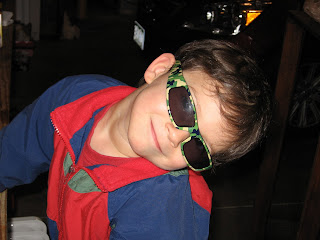 It was a beautiful spring day today, so we decided to go for a bike ride. The Mrs. googled up a bike path map for Fort TomCollins, and she selected one she thought would be great. Excepting, of course, she was looking at a bike lane on a road, not a path through a park like she wanted. So I poked around and found one up by the library in the Cathy Fromme Prairie Natural Area. The Mrs. packed up some snacks for the kids while I put the bike trailer and HannahC's bike in the back of the pickup, and then put the bike rack on the tuck and our bikes on that. MaxieC made a nuisance of himself most of the time by throwing rocks into the koi pond, and then he and his sister had a battle where they smacked each other with brooms. Then they decided to "help" me load up the bikes.

So it took forever.

Here is MaxieC enjoying his snack on the prairie. 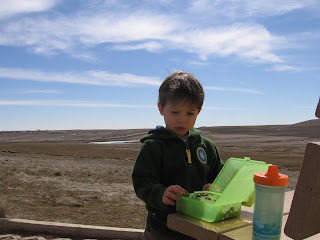 And the view in the other direction towards HannahC. The trail runs along the outer edge of the natural area, and humans are not allowed into the middle. So you can see the houses a few hundred yards back from the trail. These houses "back to public open space" and thus cost way more than they should given their itty-bitty little Fort TomCollins "we're going to manage our sprawl and not let anyone have a lot bigger than 500 sq ft" lot sizes.

A big reason I don't live in Fort TomCollins proper. 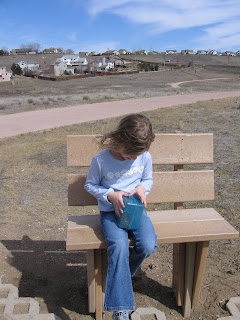 We went a little over five miles in total. I pulled MaxieC in the trailer, and HannahC and The Mrs. rode their own bikes. HannahC did pretty well, though she had a hard time keeping up on the uphills given her single gear 16" bike vs. our 24" 21 and 24 speed bikes. We'll be needing to get her a new bike this spring (which means any day now), as she's mostly outgrown the 16".

The newspaper today had an article that DIY Network's Sweat Equity show is looking for people in Fort TomCollins who are wanting to either remodel a room or update their landscaping. While I was messing around in the back yard trying to replace the igniter on the built-in barbecue, I mentioned this to The Mrs. Now, she is all excited about me auditioning. I need to call the "researcher" tomorrow.

The deck is an amazing mess right now. I had to remove the BBQ to replace the igniter (which I was able to do just fine), and I noted that it calls for 14" on the sides and 16" on the rear of clearance to anything combustible. It is installed with two rows of fire bricks on either side (maybe 6") with wooden boxes next to that, and one row of fire brick in the back with a wooden deck bench up against that.

The wooden deck bench is mostly burned away. I got the grill working again, but The Mrs. declared that we shall not use it because "it's going to set our whole house on fire."

No. Probably just the deck. The Mrs. has much better sense than I do. Oh well. That's $15 and an hour of my life I'll never get back.

When I was futzing with the grill, one of the board on the deck bench seat felt a little squishy. So I pushed on it, and it crumbled. Much of the wood on the deck is like this. Luckily, the deck itself is that synthetic wood stuff that can't rot, but all the flower boxes, trim, and benches are wood of some sort. The bench is a weird pressboard with a wood grain stamped into the surface and what looks like a 1/16" plastic coating around the outside. I've never seen such a thing before, but it apparently rots quite nicely.

The problem now, of course, is that when we do not get selected for the TV show, I'm still going to have to redo the whole deck. The Mrs. has very grand plans. I'm afraid to even listen to them. There's a hot tub and an outdoor kitchen and a "serenity area" involved.

I'm going to need to put more ads on my blog.
Posted by CherkyB at 9:51 PM

We do not own any deviled-egg related thingy, but The JohnnyB tells me that his brother, JimmyB (AKA my American bro-in-law), does.

Jimmy got an bachelor degree in hotel management, which includes a lot of cooking classes, so I guess that's his excuse.
On the other hand, whenever you go with JimmyB to a restaurant, he orders the most mundane and safe dishes, and there is no excuse for that.

HannahC made the eggs, which explains the uneven distribution of paprika.

I love deviled eggs and I have a thingy someplace but I never use it unless the Queen is coming. I put a drop or two of worstershire in mine.

Serenity area - is that where you have (a) a beer fridge, (b) 60" plasma HDTV, (c) a 3-tier brew system, a stainless steel, conical fermenter, and a comfy recliner, and no other chairs?

What's wrong with that?