FreddyC has lost interest in the bone

And thus ended this afternoon's session of fetch with the squeaky bone.

The Childrens, ever the creative sort, decided FreddyC needed a Halloween costume this year. So they snuck off to the basement and cobbled something together. 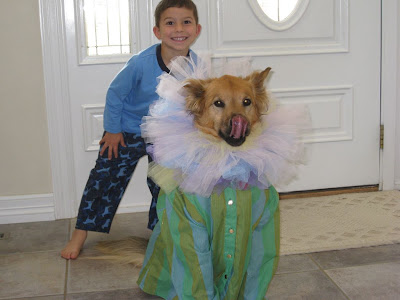 Me, CherkyB: "Wow. You dressed him as a clown! That's great!"

HannahC: "No. We dressed him as a Democrat. Do you think we can take him to blue people houses and they'll give him candy? I mean, they won't realize he's a dog, cuz they're sooo stupid."

Certificate of truthfulness not valid on the previous story.

I call this photo, "We're missing a bag of chips, and I don't know who could have taken it." 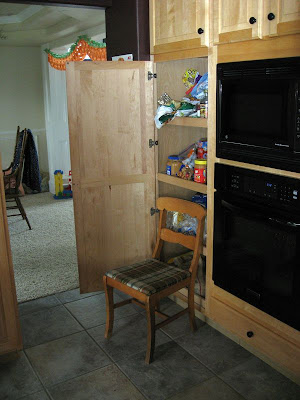 HannahC passed out invitations to a costume party she was hosting at 6:15pm. She passed out the invitations at 6:05pm, so we didn't have a lot of time to prepare. I think what she did was to check the start time of Sunday Night Football on the DirecTV listing, and then select that exact time as the start time for the party. Someone should really get a beating for that.

HannahC put on one of her numerous princess costumes. MaxieC went with the time-tested Buzz Lightyear costume that he has finally grown into this year. The Mrs., always the festive one, put on a Mexican hat from Chevy's.

It was a dance party, so here is the crowd dancing to one of those kid mixes of popular songs: 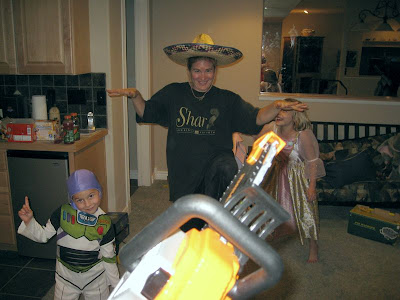 I, of course, am an artist. Thus, I can't just show up with a funny hat on (or is it racist to call a giant Mexican hat with a restaurant's name sewed on it "funny"?). No, I had to spend a little time on the old costume.

At first, I had this smashing idea that I should put on one of The Mrs.'s party dresses and some lipstick and go as The Mrs. But, as I looked through her closet, I realized that nothing fit right. Everything was too chesty and too hippy. Plus, she's practically a midget compared to me, so the length was all wrong.

I did enjoy the breeze on my junk, though. I can see why women love dresses so much.

Then, I got a great flash. I could put on a pair of sweatpants and a sweatshirt and look perturbed! I could use my own sweats, so that they fit.

But, I decided that would be too obscure.

So, instead, I went as Captain Roadkill, the hero who travels the highways of America saving roadkill from rotting and making sure that people have meat for dinner. 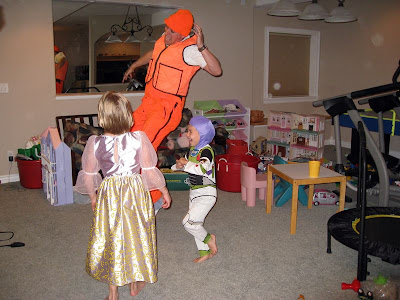 Dance like there's nobody watching.
Though, of course, when you're as good looking as I am, everyone always is.
Posted by CherkyB at 8:32 PM

You guys are a riot!

Is there anyone Hannah doesn't think is stoopid?

Lol!!! You must be drinking again; your entries are getting funnier. The chair picture is utterly hilarious. I read this entry to wheeler and he laughed his ass off (which at this point him devoid of an ass is not an altogether bad thing!). - blogauthor

I never stopped drinking. I just cut back a bit on drunk-blogging. But, you know, the Fans have Spoken.

Oh, the sacrifices I make for my art.

You guys are rocking..! I am too very excited for Halloween this year.