Thank you very much

I just went to use the basement terlet, and as I stepped on the little u-shaped shag throw rug that goes in front of it, I noted that it was awfully, awfully sopping wet. A quick whif confirmed my suspicions. Now I have to change my socks and wash my feet.

OK, I'm back. I put the rug in the shower and rinsed it well. When it dries, I'll carry it upstairs to throw in the wash.

I can imagine one of my regular readers saying, "I wanna puke," at this point.

I've been trying to kill off bottles in the bar to make room for their replacements. I was close to running out of a lot of things, but not actually out of anything. So now I have all these brand-new 1.75L bottles sitting on the counter. Like swimming pools and big breastesess, I think this falls under the attractive nuisance category of tort law.

I have thus far managed yesterday to finish off the old vodka, the result of which was my decision that it would be a good idea to have a co-blogger on my weather blog. Tonight, I need to hit either the gin or the Crown Royal.

Now, I'll tell ya, I really like Crown Royal. But ever since Hillary Clinton used it as a prop during a campaign stop, I've been somewhat uncomfortable drinking it. I don't want people to think that I take my fashion advice from Hillary. [As an aside, I always found it odd that none of the press coverage of that event noted that she turned down an American whiskey for a Canadian one. Probably nobody noticed because it wasn't Chardonnay.]

A strange thing about this, though, is that when I smoke cigars, I worry not at all that people will think I'm some kind of fat-chick-loving pervert. I wonder if this means that deep down inside, I am actually a sexist. Or if it only means that Bill is just way cool compared to his missus. You know, as far as radical leftists go, Bill really is way cool. Most of them are just dreadful scolds, invention of the internet notwithstanding.

You've talked me into it. I'm having the Crown Royal. Here's a picture: 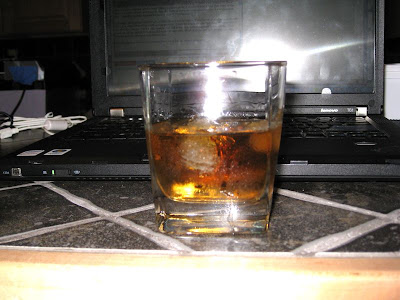 I hope you don't think me a socialist. But you'd really have to have not been paying attention to make that mistake.

The problem here is that it is going to be at least an hour before that bad boy kicks in, and I need to finish off this post and head to bed quite soon.

So who peed on the bathroom rug?

Maybe it was Angry Thespian!

I farted so hard my big toe tingles.