Obsolescence, Get to Know It

There is nothing sadder than obsolescence.  Well, other than maybe friends and family dying.  Or a pet dying.  Or The Bills going to four Superbowls in a row and losing all of them.  Or, perhaps, one of your single friends telling you he's getting married.  Or having to sit through any of The Twilight movies after the first one.  Or going to the garage refrigerator only to remember you've run out of beer.  And then realizing you're also out of bourbon, too.

There are many things sadder than obsolescence, but still, in the greater scheme of things, obsolescence is sad.  Though in a good way, because it only happens when something better comes along.  Like how nobody eats a Whopper anymore since the Whopper with Cheese came along.

Obsolescence is one of side effects of the great march of progress called "Creative Destruction" that happens largely in capitalistic societies where people are continuously striving for improvement.  Both incremental improvement and revolutionary improvement.  Creative Destruction is one of the best things ever to happen to society, and it has liberated more people from poverty than any Live Aid concert could ever hope to.

Still, it's sad when it happens to you.

For instance, when you bought a beautiful oak and cherry entertainment center that could hold an outrageously large 32" TV.  And you bought high quality furniture, because you didn't want any of that screw-together particle board crap.  No, you wanted something that was going to last and last.  And you took it from your first house to your second, then to your third.  And in the third house, it kinda ended up in the rec room in the basement, cuz there was a built-in nook in the family room that would hold a 43" DLP widescreen TV just fine. 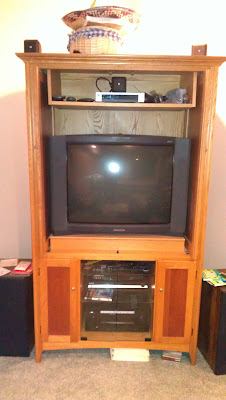 Well, the Xbox 360 is a fine piece of machinery, but tailored more for older children.  Ones who have graduated from high school and are still living in the basement.  We're a PlayStation household, having owned the original and then two of the PS2's.  And the PS3 plays Blu Ray, a big cost saver right there.

Well, son, the PS3 really wants to be run with an HDMI output onto a widescreen TV, and the rec room TV is a 14-year old analog tube TV, and it doesn't have any HDMI inputs at all.  Now, the surround sound system I have down there has 4 HDMI inputs, cuz when my old stereo reciever (though I bought with money I earned drying cars at a carwash between high school and college) died, I got it anticipating that one day we'd probably get a new TV and game system, but it can't convert HDMI inputs to analog outputs for DRM reasons..

You know the thing about a 32" tube TV with a beautiful oak and cherry cabinet?  There's not one goddamn person in northern Colorado who wants one badly enough to carry it out of the basement of someone else's house.

Another sad thing is that I'm old now.  It just happened kind of all of a sudden.  This blog used to be about all the fun little fix-it jobs I used to do and the wacky hijinx that ensued, but I have really slowed down a lot in the last couple years.  I hardly do anything.  And the thought of trying to lug this giant entertainment cabinet up the curvy stairs from the basement is itself awfully tiring.

Yes, I lined up three other guys to help, but still, I am struck with the futility of this.  There are a couple donation places that will take the furniture (but not the TV), and only if I put it in the driveway for them so they don't have to carry it out of the basement, but who will really want this?  No one.  Even poor people don't have tube TVs anymore, and the cabinet is useless for anything else.

So, I've decided to do something drastic.  I'm going to dismantle it and try to get as much good lumber out of it as possible.  It's a damn shame, as the tracks for the sliding doors that cover the TV are works of art just by themselves.  Time stands still for no one, though.  I need to take Ol' Yeller out in the woods and shoot him. 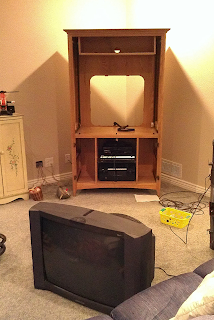 I toyed for a while with the idea of cutting the top off and saving the bottom cabinet, but I'm not sure what I would do with it.  Who needs a cabinet with sliding drawers that have inserts to hold VHS tapes?  No.  It's a goner.  I'll try to be gentle, as gentle as one can be with a Sawzall...
Posted by CherkyB at 12:34 AM