We went fishing again today. Hannah and I decided to climb down a bank to fish in a place we hadn't before in a different part of the lake. About two minutes later, I was wrangling with this guy. 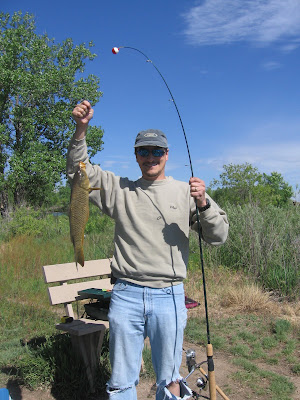 I had to send HannahC running back to get The Mrs. and the net in order to land it. I was very worried about the quality of the knots I had tied, and we were on a slope where I couldn't move around a whole bunch. It's a good thing, too, as my line actually snapped right after this picture was taken. Only has 8 lb. test on it. 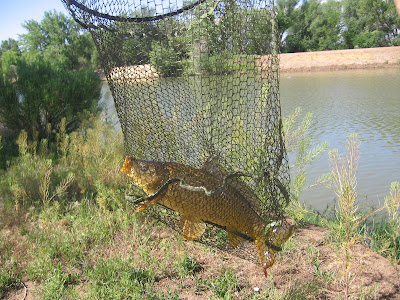 I think he's a smallmouth bass, cuz that's the closest thing to what he looks like that's in the Colorado game fish identification guide. He measured in at 19 inches.

[Update: The Mrs's brother has identified the fish as a carp, and I have to agree. It didn't match the photos of a smallmouth bass properly, but looks exactly like the photos of a carp. Well, that explains why it was so stinky.]

I didn't cook him well enough on the first try, though it looks good in the photo: 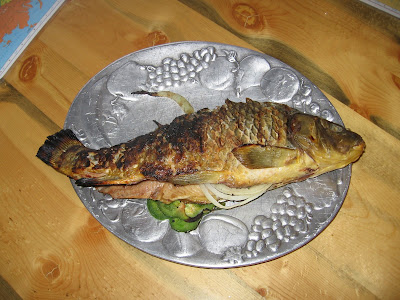 Mr. Stinkyfish had to go back on the grill after we cut into him and had a couple bites. He looked cooked, but did not taste cooked.

Carp is not a sushi fish.

But, in the end, Mr. Stinkyfish was gobbled up. 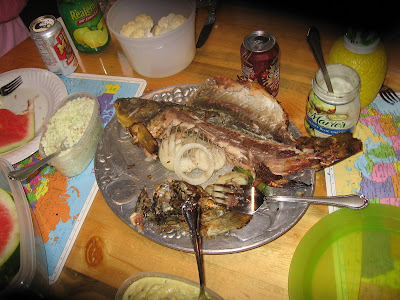 HannahC also caught her first two fish ever. The first one, she caught when I told her, "Go fish over there in the shadows." She caught this little dude about 5 minutes later. Another bluegill like I got last week, this one measuring in at around 5.5". We tossed it back, having decided a proper limit for bluegills is 6". 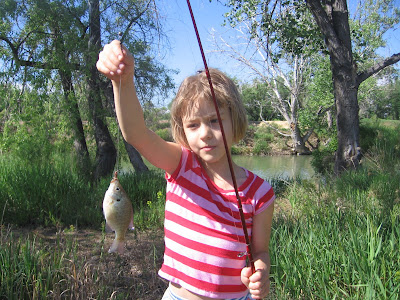 The second fish she caught was a 6" carp. We tossed it right back without even taking a picture, as The Mrs. had already declared fishing was over, so HannahC and I had been heading back to base camp. But then we saw two big carp eating bugs in the shallows and tossed a couple casts at them. They disappeared. So we kept walking back, and then we saw a little school of 4-5 fish that looked like bluegills and cast into them. Turned out she pulled out a tiny carp, not a bluegill.
Posted by CherkyB at 8:25 PM

all this fishing...who's taking care of the garden?

How did it taste after it was thoroughly cooked? Cool!

Hannaie does not look too thrilled? ? Don't you have to get all the bones out of it before cooking? What do you use for bait? Was Hannie surprised that she caught one?

I couldn't sleep last night - that fish's big round yellow eyeballs were staring at me...........

The part I didn't mention, because it was already dead when we talked, is that people don't really eat bass. Those bluegill might be tasty if you can get enough of them.

I was the nastiest, skankiest thing I ever ate. One small taste, then quietly no more for me thank you very much. I didn't say so before cuz it's CherkyB's first fish and all. We'll go for the bluegill. Thanks to the brother for the proper id. Kids liked it!