Tonight, as a special treat, I was going to cut up one of our brightly-colored plastic kitchenettes with the Sawzall. It's one that we got free, and it was an outside toy when we got it and has remained so for three years. It has not weathered well, and it's junk. Tomorrow night is garbage night, but since it's also Fat Camp night, I wanted to chop this thing up tonight. 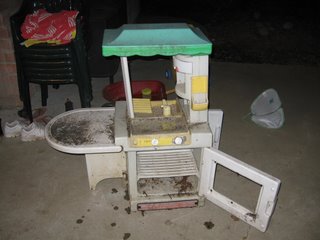 For the demolition, I'll be using a Milwaukee Heavy Duty Orbital Super Sawzall, model 6521-21. This is one of the genuine made in USA models, not one of the junky Taiwanese ones you'd find at Home Depot. I got it on eBay for not a bad price at all. 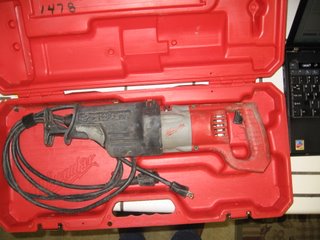 At this point, I had to rip The Mrs. away from watching HGTV's "I want that" to snap the play-by-play of the destruction. She whined a lot about having "other things to do". This after she complained that I had not posted yet today even though she had gone upstairs to the compooter room to read my latest post.

Here is me preparing the business end of my tool. In this picture, you can really get a feel for how big my tool is. In the above picture, it doesn't look as big, I think cuz you're looking down on it. I'm loading it up with a blade called "The Ax", though after reading this, I guess I should have used The Wrecker. I don't have The Wrecker, though. I do have a couple general purpose blades, but The Ax looked a lot more badass, so I decided to start with that. 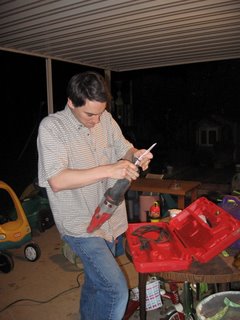 Here, I take the first cut. I figure I'll start easy and just cut through this little plastic post and the screw holding it in. The Ax cut it like butter. 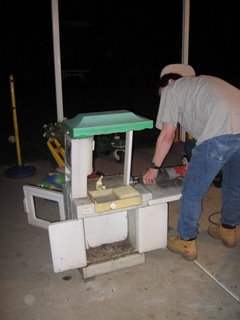 However, at this point The Mrs. says, "Wow, that saw is really loud. Can you try breaking it up without using the saw?"

Now, the sheer ridiculousness of the question aside, this was an anticipated problem, as when I was setting up, I said, "It's 10:00. Do you think it'll be too loud to be outside sawing?" And The Mrs. had said, "Don't worry about it. They always keep us up with their TV's on too loud." See, the house right next to us is a short-term geriatric rehabilitation home. And most of the folks there are half deaf.

So, this is all the demolition you get for today. I'll finish the rest during daylight hours. Maybe Saturday. You can leave in the comments requests for how many pieces I should cut it up into. So far, it is 2. I'm pretty sure I only need to cut the base clean in half vertically to fit it in the garbage can, but that wouldn't leave much room for garbage.

On a lighter note, the pall that descended over the C household yesterday appears to have lifted. You'll have to check out The Mrs.'s blog for more details, but of course that blog is invite-only, so all of you who are allowed to know already do, and for the rest of you, I guess it's nanny-nanny-boo-boo.

I tried to drum up some excitement for going mountain biking tomorrow night, which is what the original "fat camp" moniker came from, but it seems to have fallen on deaf ears. BrainkyP claimed he was too big a loser to go (even, at one point, saying "I have to ask my wife" when we all know his wife doesn't give a rat's behind what he does), ScottyM claimed it wasn't enough advance notice (after which I asserted it was 29 hours of advanced notice, and I didn't think it took 29 hours to put air in his bike tires, at which point he bragged about how fast his air compressor could blow them up, leaving us with a conundrum), I didn't bother asking StinkyJ cuz he is afraid of dirt (though now he has been using the fact that he has 4-week old twins as his all-purpose I'm-not-lame-just-busy ploy), AndyP and Spanky did not respond to email, and TommyO is on sabbatical in that god-forsaken land some refer to as, alternately, either South Canada or Wisconsin. Then they scheduled a Big Important meeting at 5pm anyways, so now I can't even go. Bastardos.
Posted by CherkyB at 10:43 PM

you can't "simply" leave that in your curb for the garbage pickup?

Of course not. Here in California, garbage is considered both wasteful and a potential source of revenue. That combination is deadly. We must pay ahead of time for our garbage allocation, and we pay for one 64-gallon can per week. All garbage must be in the city-supplied can so that the robotic arm can pick it up and dump it into the top of the truck. It is not possible to throw out garbage that does not fit in the special can without scheduling a "large item" special pickup, which is $25 for two items, and they send a couple guys in a flatbed, stake truck with a lift on the back for that.

That's the root cause of everything, it made you to do all this.