If, by Santa, you mean the garbage truck.

Friday was garbage day here at the homefront. When I got home from work, I noticed our garbage and recycling cans were still at the curb. Normally, The Mrs. is right on top of this and has them stashed away long before I get home. Then I looks around and I says to myself, "Self. That's strange. Everybody still has their garbage cans out. Given that you're the last one to get home most days, you almost never see anyone else's garbage cans out when you get home."

"Self, you can see how the can next door is so full that the lid doesn't quite close. Could it be that the garbage truck missed our street?"

Why yes, yes it could be. Now, just try to get someone from the city on the phone at 7pm on a Friday night to complaint that your garbage wasn't picked up. You can't. You can call the garbage number and get a machine that says office hours are M-F 8-5. If you surf the web long enough (as The Mrs. did), you can find someone that you can talk to Saturday morning who will say very nice things like, "Oh. That's terrible." But you can't find anyone to say anything like, "I'll send a truck around this afternoon." The best you can get is, "I doubt I can do anything before Monday."

It has been quite a topic of conversation this weekend. Everybody still has the garbage cans out, hoping against hope for a surprise visit of the garbage truck. And every time you see a neighbor, they say, "What's up with the garbage? Were you able to talk to anybody?"

It seems The Mrs. was the only one who actually found the secret number that gets you to an empathetic, but unhelpful, woman. The Mrs. is now a celebrity on the street.

The sad thing is that this week we did a lot of spring cleaning, including cutting up brightly-colored plastic toys and lots of cardboard boxes. So both the recycling and the trash are full to the brim. We've been adding more since Friday, plus filling up the excess capacity in the across-the-street neighbor's cans.

And I don't expect tomorrow to see a truck, either. Tomorrow is "A Day without Illegals" day, and all peoples of Mexican heritage are expected to mob downtown to demand we stop declaring there is such a thing as American citizenship. I expect much of the garbage crew will call in sick, throwing the normal Monday schedule for a loop and making it impossible to send someone off course to pick up 13 houses of trash.

OK, wait. I'm gonna do an impression. Here it is: 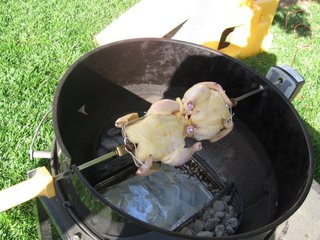 Didja figure it out? That was my impression of CJ's Blah.

Actually, that's dinner after I just started up the rotiss. A couple of Cornish game hens. They are much better when rotisseried than when cooked any other way.

You folks have probably been wondering why I haven't posted for a number of days. Well, Thursday was Fat Camp, which is my day off from blogging. Then on Friday, The Mrs. decided we should watch a moovie. She also sipped on a Black Russian while we watched Swordfish. It was a good moovie, but we got started late enough that we only got to see the first hour before it was time to go to bed.

The first hour does contain the little Halle Berry scene that made the moovie all the rage. There was a time when I'd get all excited about such a thing, but the Internet has jaded me.

Saturday was building day. We needed to finish the garden boxes started here and continued here. When last we left you, we had the two boxes built but not sanded, and we had not yet started on the frames for the anti-bird lids. So this is where we picked up on Saturday.

I took out the old belt sander, and little HannieC's eyes practically jumped out of her head. "I wanna try that! I wanna try that!" So, like a good daddy, I showed her how to hold it carefully with two hands, and work it with the grain, etc., and then I sat back to sip a brewski and watch the fun. She had a wonderful time. Despite it being a very small belt sander, it was still more than she could really muscle, taking off on her like a drag racer every time she hit the trigger. So she developed a technique of giving short little bursts to the trigger, effectively reducing the power. This worked all right for her, though it worked out better for the wood which sustained hardly a scrape. 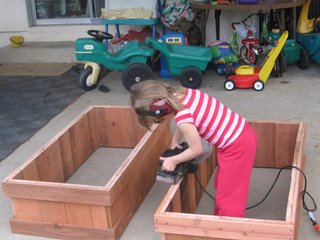 So now HannieC has learned how to use a router table, a power miter saw, and a belt sander all during the course of this project. Add this to her previous familiarity with a power drill and a palm sander, and she already knows how to do more stuff than most full-grown womens do.

Here's a picture of the two boxes all sanded and routed. I hit the inside edge with a 1/4" roundover bit just to take off the splinters. Next up, the tops. 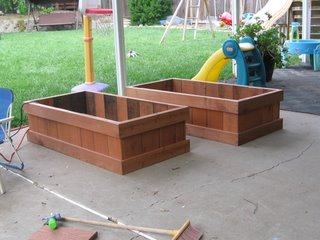 I was somewhat negligent in taking picture of the tops during construction. It was a pretty easy task. What I decided to do was to just do 90 degree corner joints that I would rabbet into the corner posts. I decided the frame for the top should fit just inside the box so that it could sit down on top of the dirt and be very secure. The corner posts are 2x2 while the stringers are 1x3. Here's a picture of a corner post after rabbetting it on 2 sides at both ends on the router table. I used a Craftsman Professional 3/4" straight-cut bit. It cut nicely, but man was it time consuming doing all these rabbets on 8 different corner posts. Each rabbet required six passes on the table, and there were four per post. That's 192 passes, if I do the math right. 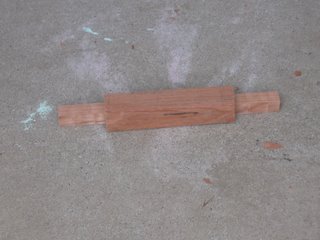 Hey! Here's a picture of our new Bistro set up at The Bistro Spot. How'd that get in here? 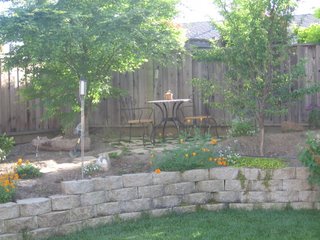 Saturday afternoon, after the construction was done, it was time to put on the wood preservative. I know what's you're thinking. "Didn't he spend $170 buying all heart redwood? That stuff never rots. Why is he wasting his time with wood preservative?" Well, I just spent 3 days building these stupid boxes. What's another couple hours to make them look nice (I got "redwood" tinted preservative) and last longer?

Here I am along with The Childrens slathering this stuff on. It's very oily. The Childrens had a great time. Even The Mrs. joined in after she got done taking pictures. The garden in which these will reside is just over my right shoulder in the upper left of the picture. 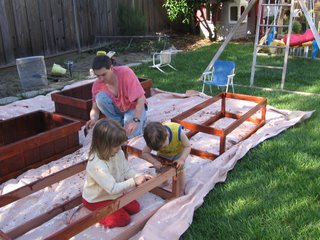 Fast-forward to Sunday, and the preservative is all absorbed and it's time to set these bad boys up. But wait! These boxes are 2'x4'x1'. That's 16 cu ft. of total capacity? Where am I going to get 16 cu. ft. of dirt? I sure don't have that lying around. So it's off to The Dirt Place. Well, not quite so fast. First, it's time to winch the camper shell off the back of the truck and up into its summer storage area at the ceiling of the garage. Then it's off to The Dirt Place.

Pictured below is what a half-cubic-yard of dirt looks like in the back of my truck. That's about 1000 lbs. of dirt, and it costs $22 + tax. This is what they call "planting mix", which means it's a good topsoil for lawns and garden beds. It's not perfect for vegetable gardens, but I have a big compost pile and three 1-cu-ft. bags of steer manure/compost mix from Home Depot, and with that mixed in, it'll be perfect. Note the recycling can across the street, ever hopeful. If you look carefully through the upper left corner of the center pane of my rear window, you can see another across the street in front of the truck. 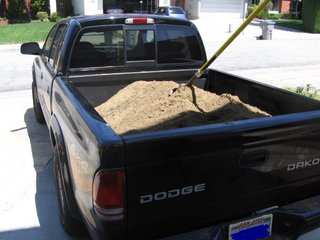 Here are the boxes in their final resting places. They're all filled with dirt. The tops are still frames, as I haven't had a chance to hook up the screens yet. We just decided today not to use hardware cloth, but instead to use bird netting. It's much lighter and easier to cut and tack in place. 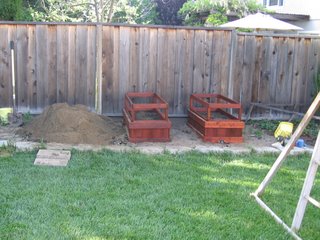 Wait! What's that giant pile of dirt to the left? Oddly, I had 5-6 cu-ft. left over. I don't know why. I suspect that it's because the "small scoop" on the front loader that they use to dump a half-yard quantity in the back of the truck is much larger than a half-yard. I've been to this place many times, and it always works out that way. The full yard seems to be more-or-less dead on.
Posted by CherkyB at 10:29 PM

Beautiful boxes - can I hire Hannah??

Our garbage did get picked up, but I had to drive behind a Suburban which had a passenger waving a Mexican flag out the window. I felt really angry. They'll probably demand that I give them half the gas out of my gas tank at each stop sign. Then they'll demand that legislation be passed to make stop signs in Spanish and English, with Spanish at the top in bold and the colors of the Mexican flag painted on the border of the sign, only they won't actually be required to stop because stopping is racist, and they automatically have the right of way anyway. Of course, they are illegal, so they don't pay taxes, so who do you think pays for the new signs?