There's a face off in the corner

Way back when we were planning to move to FC, HannieC raised numerous objections about how she'd miss all her friends, in particular that JoeyG boy down the street that she was planning to marry, and miss all her teachers, and all that rot. So, as a good parent, I tried to soothe her fears.

I told her that after we moved, we'd get an air hockey table. This was because many of the houses we had looked at had air hockey tables, and HannieC and MaxieC became addicted. To the point that we have to pay to use the coin-op ones whenever we come across on in a hotel or bowling alley or where ever.

Now, as I child, I had had a cheap air hockey table. My brother, SunshineBand, and I had played for many many hours over a number of years until eventually the motor fell off. That turned out to be unfixable.

A week ago Saturday, I had to drop HannieC off at a birthday party at Windsor Main Park, and then I had some errands to run. Mostly, I had to go to the liquor store cuz we were having our neighbors over for dinner. Despite filling a shopping cart completely at the liquor store (they give a 15% discount on wine if you buy at least 12 bottles), I was left with a little time to kill before it was time to pick up HannieC.

So I went to the local pool table/bar stool/foosball/air hockey store. There, they had a wonderful selection of four air hockey tables. Two of them were quickly dismissed due to the lack of electronic scoring. The other two were a tough call. Both were deeply discounted from their "regular" price. I finally decided to go with the one that had a black-light overhead and fluorescent green pucks and rails for ultra-cool glow-in-the-dark action. Thing is, I couldn't get it home that day. I would need help.

I was out of town (in Hudson, Mass. - more on that later if I get permission to start blogging again) Mon-Thurs, so my next chance to pick it up was Friday. Friday came, and I poked around looking for all my "friends". Needless to say, I was only able to scare up CJ, since most of my "friends" are remarkably unreliable. I was a little worried that CJ might not be a very good furniture mover due to unfortunate ethnic stereotypes that are imprinted upon me.

But I shook that off.

On the way to the store, as we were walking to our vehicles, CJ asked if it weighed very much, because he wasn't very good at lifting heavy things. Hmmm...

We got it disassembled in short order, and then lugged it to the truck, taking many rests along the way and suspecting that my 100lbs. estimate wasn't all that accurate. We loaded it up, and I got to teach CJ how to use ratchet tie downs. This is an important skill for a man to have. Not as important as being able to lift heavy things, but important nonetheless.

When we got it home, I enlisted the help of The Mrs. in hauling the thing down the stairs to the basement. Now, The Mrs. ain't all that good at lifting heavy things, either. But I figured between the two of them, they'd probably add up to a decent-sized man.

That turned out to be about as accurate as my 100lbs. But I got out my furniture dolly, and we got to wheel it everywhere except down the stairs. We charged the stairs with great gusto. I took the bottom, hefted it up, and began walking down the stairs. The Keystone Cops at the other end immediately broke into disarray, with The Mrs. barking orders at CJ and complaining that he wasn't carrying his load, and CJ running around like a chicken with its head cut off in an effort to placate The Mrs. and be useful at the same time.

Meanwhile, I basically just pulled the table downstairs and hoped that one or both of them might lay a hand on it long enough to soften the crash as their end dropped from step to step. This elicited a lot of instructions from The Mrs. about how I was going too fast.

We made it almost to the bottom when a "rest" was declared for the two at the top. Me, CherkyB, well I got to stand at the bottom holding up my end while their end rested happily three steps up. I suppose I got to stand still while shouldering my burden, which maybe counts as a rest.

I was reminded of a similar situation carrying a sleeper sofa up to the master bedroom sitting area of the San Schmose house with Spanky and The Mrs. CJ is my new Spanky, except that Spanky was a much, much better drinker. And conversationalist.

I'm working on both those things with CJ. Check back in about a year. CJ, like the Spanky before him, has a heart of gold and is always willing to lend a hand. So I say these things are area of development, not as areas of improvement required.

Here, at long last, is a shot of the air hockey table in its first hours. As you can see from this and all pictures of MaxieC, he is a very morose and introspective child. I hope he grows out of it. 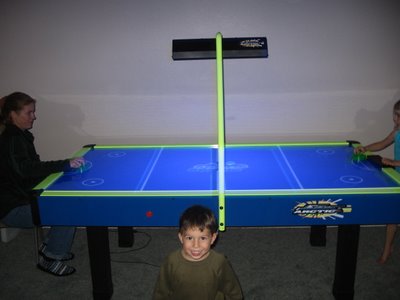 Here's the rear quarter shot. If this were a car, it'd look better from this angle. I'm not sure it adds much to the air hockey table. 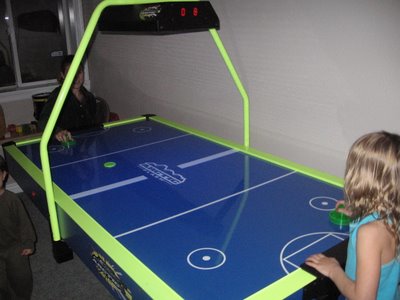 I tried to capture a shot of the blacklight-lit tabletop, but damned if my digital camera doesn't make it look all terrible. Pretend this is an eerie glow. 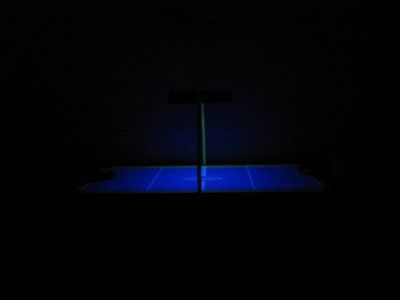 While we were setting up the air hockey table, the mattress delivery guys showed up to bring us our new guest room and master bedroom mattresses. I hung up the blinds on Saturday morning, and that concluded the Guest Room project. Here are a couple photos The Mrs. snapped. The room anxiously awaits the arrival of Fat Moother for Thanksgiving. 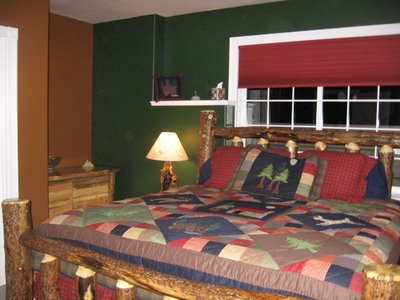 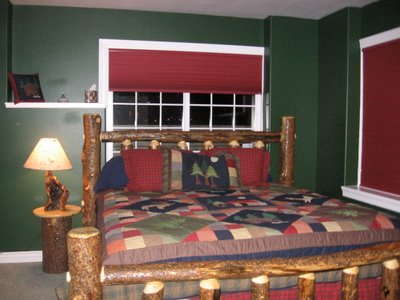 When I was in Hudson, I was snookered into drinking a vile concoction called "Old Salt Ale" at dinner the first night. This turns out to be a wheat beer served with salt around the rim of the glass and a lemon floating in it. I took a picture of it because I didn't think anyone would believe that I would order such a thing. I blame jet lag. I managed to choke it down, as a man always finishes his beer. But I had to quickly quaff a Sam Adams to wash the taste out of my mouth. 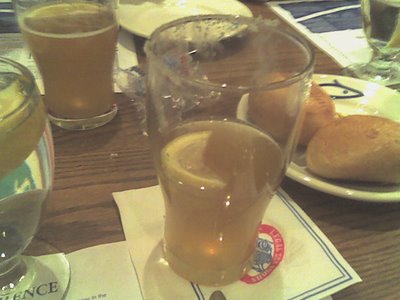 Those of us who "grew up in one or more of those poor, sad countries where they do not speak English" are wondering why would Fat Moother (or anyone else) want to stay at the gust room.
Would be a bit chilly, no?

You wacky foreigners. I can never figure out what the hell it is you are talking about.

You drank that? Ewwww.

Old Salt Ale? And it was actually on the menu, not just some "special" that the bartender made up on the spot to see if he could sucker someone w/o an accent into drinking?

Life's to short to drink bad beer. Gripe about my "just add water" homebrew, but it's gotta be better than that Old Salt Ale.

BTW - The Tongue Splitter is done, has a great label, and Nava's moved up into 1st place in my blog referrals, as she's giving me 3x the traffic you are.

That whole "Banned from Blogging" phase has hit you hard!

That room is absolutely gorgeous. Fat Moother should really like it. That "drink" looks like a glass of horse p... never mind- to each his own.