I have a wonderful installment of Something Not to Do ™, but I talked it over with The Mrs. at lunch, and we decided I shouldn't post it. I couldn't figure out a way to post it without causing some trouble, and neither could she.

So instead, I'm going to start a new, parallel series called "Duh, or No Duh? ™" which will feature Certified True ™ stories that will all end with either, "Duh," or, "No Duh."

The irony here, for my many readers who perhaps grew up in one or more of those poor, sad countries where they do not speak English, is that "duh" and "no duh" are frequently used interchangeably, much the way "I couldn't care less" and "I could care less" are. Technically, "duh" means "you figured that all out by yourself, you moron" and "no duh" means "just because you're a moron doesn't mean you should assume I am too, you moron." Fairly subtle differences that you the Me, CherkyB reader will now be aware of such that you can be sure to choose the correct phrase in the future. You're not going to get that kind of education on The JohnnyB, that's for sure.

So, now that I've introduced the series, let's jump right into the first installment. It all began yesterday, when CJ was helping me pick up the air hockey table I had purchased on the Saturday before. (More on that later, if I can get permission from The Mrs. to start blogging again.) After the table was all set up in the basement and The Childrens were playing on it, I gave CJ the tour of the house, since he'd never been here before.

When I showed him the bar, I opened up the cupboards to show the stock. It looked like this: 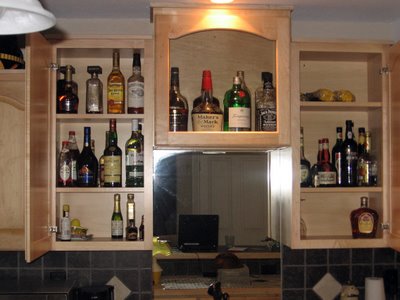 CJ said, "Wow. I thought you drank it all before the move. You must have restocked."

Labels: Duh or No Duh

Who is the air hockey table really for? Only a month away from Xmas and you are spoiling the childrens with an 'spensive toy already - hmmm......... Let us know when you are allowed to blog again, willya?

Can you 'splain the difference between duh and doh?

Sure. "Duh" means "you figured that all out by yourself, you moron", whereas "Doh" means "I would have figured that out all by myself in time to avoid this mess if I weren't such a moron."

Most of you folks will find yourselves using "Doh" a lot more than "Duh". I, CherkyB, rarely have occasion to use "Doh".

Wow! Just when I thought there was nowhere to go but down, The CherkyB swings for the bleachers and connects.