MaxieC is still sick, but not nearly as bad as yesterday. I'm still sick - a little worse than yesterday but not too bad. Everyone else is not sick.

I took HannieC out for some lawnmower joyriding, then she wanted me to pull her in the bike trailer to the park that's a couple blocks over. I did that, but I paid for it later. It really wiped me out. I had to go down into the basement and take a nap on the couch. I lay there peacefully, undiscovered for about 1 quarter (the second quarter of Dallas v. Tampa Bay), until The Mrs. woke me up to "play" with MaxieC.

It turned out what she meant when she said "play" was "change his nasty, poopy diaper".

We shall eat soon, I suspect.

The good new is that I found Dave: 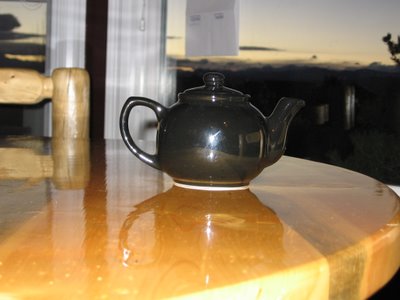 Dave is a very handsome teapot.

Now HannieC has barfed. We'll see what happens with that. It might just be too much eggnog and pie.

ahh Dave was lost and now he's found.
I like his shiny chocolaty color.
A classy pot indeed.

Dave, in his meditative on the background of the evening skies of Colorado, looks like he has a fascinating story to tell.

We are all eager to hear it.

Sounds like Fat Moother has brought some virus as a Thanksgiving gift.

Yes. And I have no doubt that if Dave were to start a blog, which he tell me he would call "DaveyT's Bag", it would be quite a bit more entertaining than yours.

I don't think Moother brought a virus. She just has a terrible habit of purging to the point of needing an IV after air travel. Plus, the incubation period would be much longer - MaxieC was sick less than 24 hours after her arrival. And HannieC bounced right back after only one episode. I told her not to drink a second glass of eggnog. Jeez - she should really learn to listen to her mother.

CherkyB is very attached to Dave, short and stout. He made him feel a lot better. CherkyB is very cute in this regard - he personifies a lot of things, and just loves the hamster and doggies (but not in a way that is not legal.)

WifeyC - have you checked the laws in Colorado? You know it's one of those red states...

And you know CherkyB's predispositions...

Do you recognize this smile? Have you seen it on CherkyB?

As I stated in a prevous post, HannieC only wanted her turn at barfing. When she discovered that it was not all that much fun, she promptly put a halt to it. Of course she would never admit to the fact that she should not have had the 2nd glass of eggnog. I have not heard any retching noises so far this AM, so it might be a barf free day, one never knows. CherkyB is counting down the days until he can return to work and get away from this insanity.

It's a sad, sad day, when Intel is considered to be a sane refuge.

I wonder how come you are all C's (including FreddieC), and Dave is suddenly a T.
Interesting twist.

Well not quite a barf free day- the Damn Dog, FreddyC managed to spew up some chunky material, MrsC. was on the verge of puking but a half tablet of phenegan (sp?) seemed to do the trick. The tree is up and looks huge. CherkyB can have the honors of posting the story since this is his blog.