See, the real reason I took Thursday off to recover from my flu was that we had plans for Friday night. Plans that were a surprise for The Childrens and that I did not want to miss. HannahC had spent all day Friday trying to guess what the surprise was, but she did not figure it out. Oddly, she did not even figure it out as we were heading into the Budweiser Events Center in Loverlyland, despite the recorded message blaring continuously over the loudspeaker announcing the event as we went inside.

Nope, The Childrens didn't figure it out until we all sat down in our seats and they started to look around.

Here, MaxieC has figured it out: 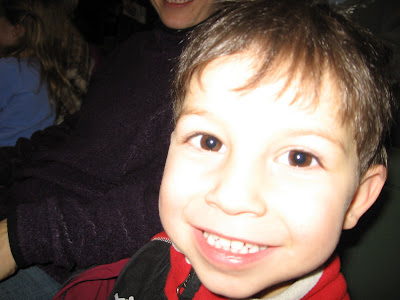 And HannahC, sitting between GrammaC and The Mrs., seems to be on to something here. Those big giant trucks off in the background maybe tipped her off. 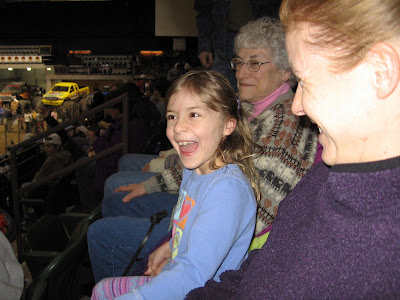 The show starts, and each of the Monster Trucks gets an introduction and drives out. Here, Public Disturbance makes his entrance. This was funny, cuz he ran right over the starting light tree and busted it into more pieces than it needed to be in order to work. For the whole night, they had to start all the races old-school style - by waving a green flag. 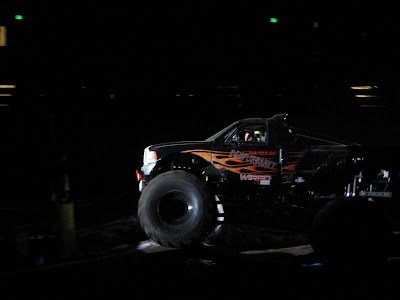 After the intro's, here are High Voltage, Public Disturbance, and Bigfoot all parked in a row. 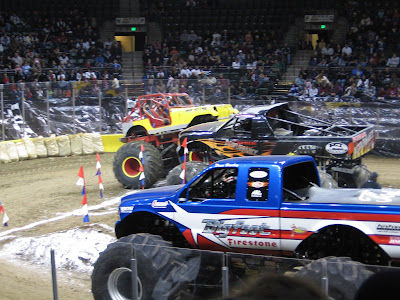 Here are a bunch of action shots demonstrating about the same technique I use to clear the parking-lot speed bumps when it's my turn to drive to lunch. 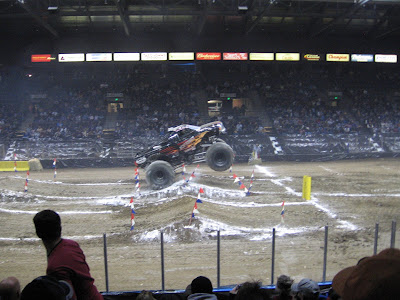 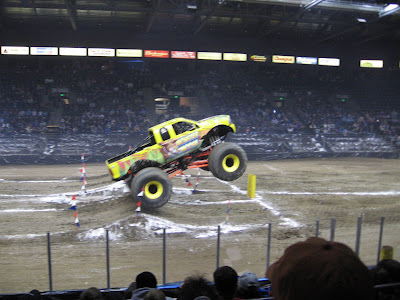 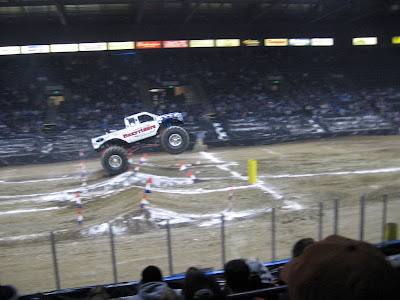 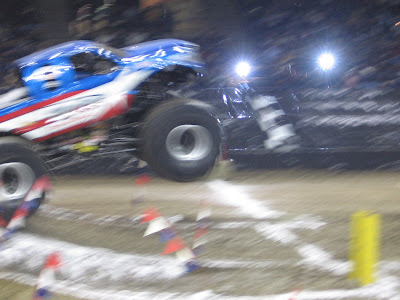 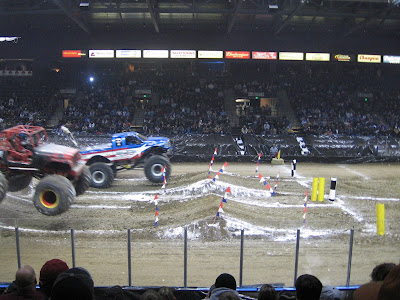 I probably should have borrowed someone's DSLR camera, as the very slow shutter response on my Canon PowerShot A520 made it hard to really capture what I was trying to shoot. However, I don't know anyone who has a DSLR camera with a decent zoom lens.

This was a really short track. The Event Center is hockey-rink sized, so you're seeing almost the whole monster truck race track on that last photo. It was two hills. During "qualifying," when each truck runs each track solo once to establish position for the elimination rounds, they announce the times. Bigfoot did the best with a time in the 2.4 second range. Hot Stuff did the worst with a time somewhere in the 3.4 second range. So they were really short races.

They also had a lot of other racing that went on in between monster truck rounds. They had quad racing, dirt-bike racing, and "tough trucks". These guys all actually got to circle the track a bunch of times, so it was fun to watch. And they crashed sometimes, too, as an added bonus.

Unfortunately, 1.5 hours into the show when there was an intermission, The Mrs. declared that MaxieC needed to go home cuz he was too tired to continue on. I was skeptical, as he had been bouncing all around showing what I would consider the exact opposite symptom of tiredness, but I'm not in charge. So we packed up the whole fambly and headed home.

About an hour and a half later, MaxieC was just starting to wind down enough to consider going to sleep.

Looks a blast!
Mom always knows best.
It's a good thing that you adhere to this.
:)

I'm glad it happened that way. What good is a hero if he isn't always opressed.