I haven't posted any pictures to the old blog in a long time. In fact, I had to install the software on my compooter to get the photos out of the camera, and I got this compooter in December. I leave it as an exercise to the reader to see when the last time I used picture was.

So, given that I've taken my eye off the visual side of the blog, it's perhaps not surprising that I forgot to take "before" pictures for the playset refinishing project. I was kinda smart enough to take "during" photos, though not until I finished the cleaning phase. However, the playset is not something I have never photographed, so I dug through my photo archive and found this little beauty from August of 2006. This is just a couple weeks after we moved in and shows the nicest the playset has ever been. It also makes me yearn for spring. 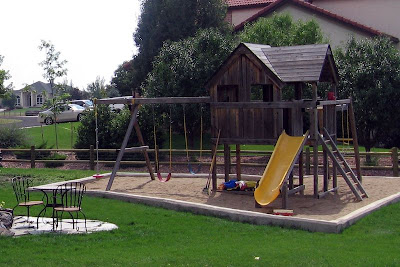 Here's the shot after the cleaning. Olympic scrub-free deck cleaner. It really works, and the color difference for the most parts appears in less than 30 seconds. It's not just a different lighting on the photo. It really looks this different. Surprised the hell out of me, to be honest. 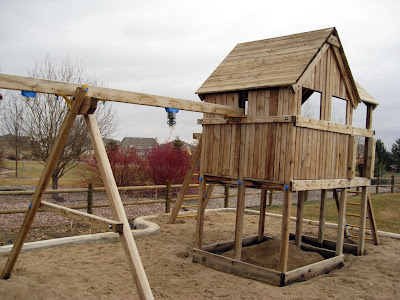 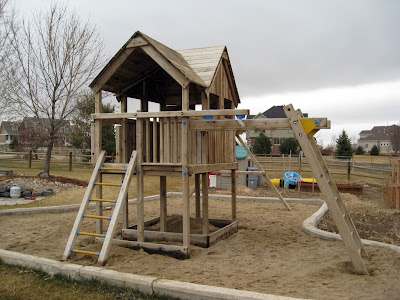 One thing I thought I had talked about, but apparently I did that at lunch wif da boyz and not on the blog, was that the support for the bottom of the slide turned out to be all rotted. It turned out that due to this rot, the sides were no longer parallel to each other but instead angled inwards at the top. This mad the slide suddenly narrower at the end, which you can actually see in the first photo. So I rebuilt the crosspiece. The old, rotted timber is in the front of the photo.

I sistered together two 2x6 lengths of redwood that were leftover from the deck. I held them together with 4 3/4"x3" carriage bolts and some exterior-grade deck and subfloor construction adhesive. It was easier than buying an 8-foot 4x6 and cutting and notching it to size and having a lot left over. I used the 1" forstner bit that was given to me for a birthday or Christmas or something by The Mrs.'s mother to countersink the nuts and the hex-head lag screws. Thanks, Moo Moo. 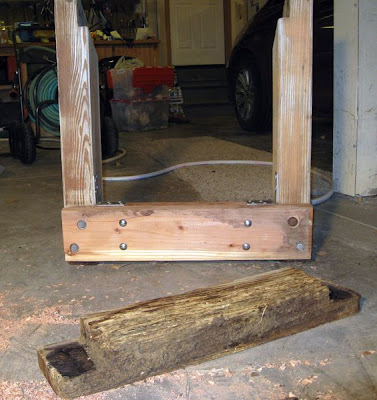 Then, I noted that I didn't like how the corners were kept at right angles. The original piece wasn't cut tightly enough for the notch to support the verticals, and so it relied on just 2 lag screws in each leg to keep them upright. With the pounding a slide takes, plus the fact that these bolts are buried under sand all the time (making the wood prone to squishyness), the joints get a little loose.

Well, say what you will about Ashley's singing talent, but that Simpson family really knows how to make a strong tie. I had a few of these mohambees left over from a prior project, so I slapped them on with hot-dipped screw-shank deck nails. Like a Power Bar in my colon, it's going nowhere. 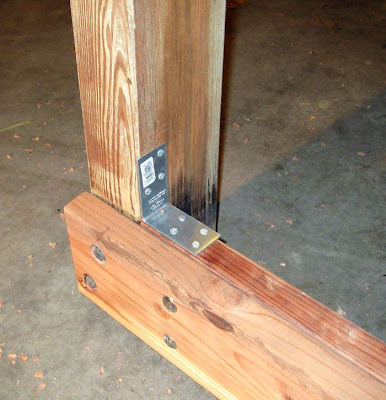