So first off, let me say I had a wonderful story to tell in today's blarg. It involved getting help in such a fashion that the job would take longer than it would without help. But before I got started, I was perusing some of the new posts from the old blogroll and, much to my chagrin, I discovered that Rio had blogged about the same thing already today. Now, she actually titled her post "My Greatness".

This gave me pause.

"My Greatness". I got to thinking what a blog post of mine with that title would look like. I had never really considered it before. Normally, when a dude titles a blog post "My Greatness", it will include grainy cellphone photos he shot of his manhood, badly Photoshopped for, shall we say, her pleasure. I don't even own Photoshop, and my Windows 3.1 version of CorelPaint doesn't seem to run anymore. So at Me, CherkyB, my greatness is just going to have to be implicit.

But I'm still gonna tell the story about the help, since it's the only interesting thing that happened today. See, it all started when I went outside this morning to work on the playset. Today, I was applying the tinted sealer. Shortly after I began, HannahC showed up in her painting clothes. So I gave her a roller, and she proceeded to roll on the sealer. She didn't do the best job in the world, or the fastest, but it was non-negative work.

Then MaxieC showed up with The Mrs. He wanted to paint, too. The Mrs. put him in his paint clothes, and he came out. He and HannahC fought over which of the two rollers and one brush they each wanted, with them both changing their minds in rapid succession but always agreeing that they wanted exactly the same one at all times. Finally this got all worked out.

The Mrs. asked what I wanted her to do. I said, "Try to keep them from putting the rollers in the sand. Mostly MaxieC, since HannahC seems to be OK."

So, The Mrs. processed to grab a paintbrush and started sealing also. The way she kepy tabs on MaxieC, as far as I could tell, was to bark out criticism every 10-15 seconds about how he wasn't paying enough attention. In between that, she had to bark out orders at HannahC as well about how she was dripping the stuff too much.

Now, if you've ever dealt with sealer or stain, you know this is very thin stuff. It's designed to be absorbed by the wood, after all. There is simply no way to apply it that doesn't drip a bit off the roller or brush.

I'm listening to all this hollering, trying to tune it out and go to my happy place, when out of the corner of my eye, I see a paint roller come toppling down. I look over just in time to see the roller extension handle bonk off The Mrs.'s head and the roller land right in the sand. And little MaxieC saying how he accidentally dropped it.

So The Mrs. is all whining, the way only a woman can, about how horribly hurt she is because a 2 lbs. aluminum tube brushed the top of her head. But at the same time, she is telling MaxieC what a badly behaved boy he is for dropping it on her head. I noted later to The Mrs., after she had calmed down, how it really might not have been the best idea to give a little boy who just turned four and is barely more than three feet tall a paint roller on an eight foot extension pole so he could paint the stuff that was ten feet off the ground. In gusting winds.

She felt I was criticizing her.

I took the roller and hosed it off. Not the best thing to do with oil-based sealer, but about all that could be done. I then rolled all the water off onto a piece of cardboard. Upon my return, there was still no end to the hollering. So I sent all three of them packing back into the house so I could get a little peace.

I hope The Mrs. hasn't written any nasty couplets about me because of it.

After about 5 hours of work, during which time it never got above 43 degrees so I had to keep running into the garage to return the feeling to my fingers, I managed to use up three of the four gallons of sealer I had purchased. I think I'm a bit over halfway done, as I have two exterior walls, 1/4 of the roof, almost the entire interior, the swing extension, and most of the underside of the "house" done. It'll probably take 3 more gallons and another 5 hours to finish. Next weekend, I suppose. 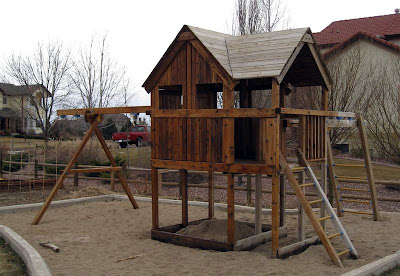 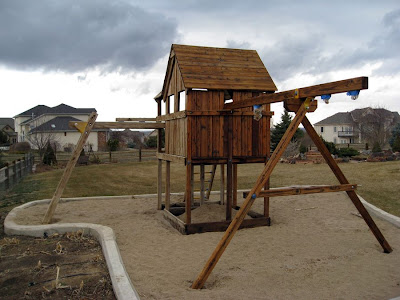 Shortly after I packed it in, it began to snow. Joy.
Posted by CherkyB at 9:40 PM

Why are you doing this now? It is only March for crying out loud!

You had me at "grainy photos of [your] manhood". *sweeping romantic music that sounds suspiciously like Barry White*

Your greatness and mine should get into a public war of words to boost our celebrity cachet.