Our household has weathered El Blizzardo quite well. At least, compared to poor CJ and his leaking roof. You can also find some more local coverage of El Blizzardo over at Cavagnaro Blogger.

The snow piled up against the guest room window really makes the scene perfect. 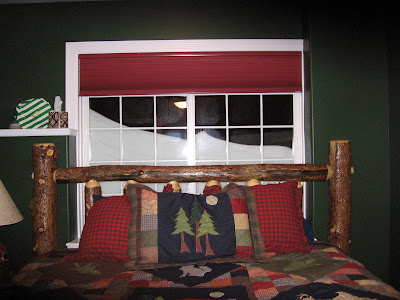 Thursday was garbage day. So, dutifully, I spent 20 minutes dragging my garbage can out through about a foot and a half of snow on Wednesday night. This is a shot taken by The Mrs. on Thursday morning. I call it "The Optimist." 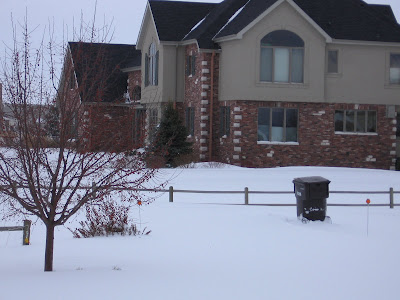 The garbage can is still sitting there today, though now the neighbors have started to set theirs out as well. Do they know something I don't? 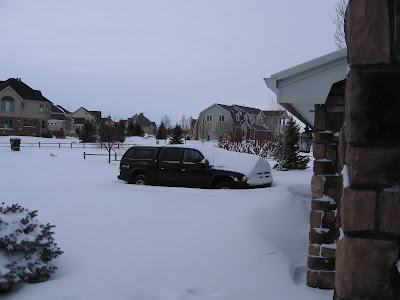 We had a snowdrift that covered up most of the clerestory window in the entranceway. That would mean snow about 20 feet deep! 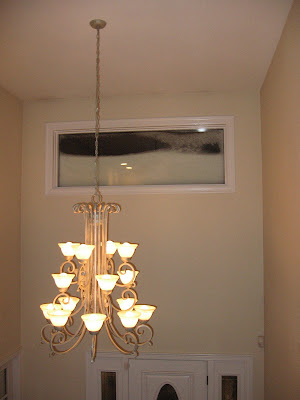 Most of the work we got done was posing for photographs. The snow was past MaxieC's waist, so any time he venture anywhere that wasn't shoveled, he got stuck and started hollering, "I need help! I need help!"

HannahC, on the other hand, spent most of her time figuring out where I was shoveling, and standing right directly there. 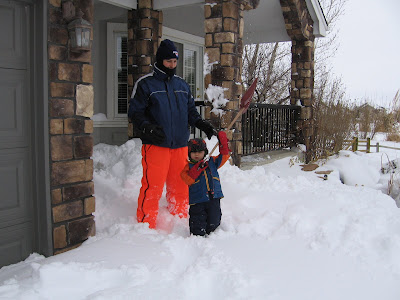 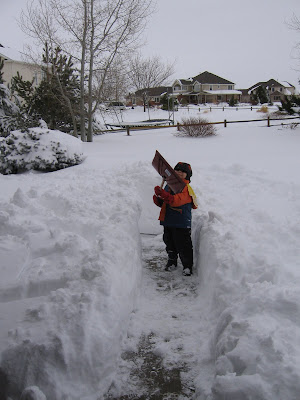 This is how much we managed to shovel during the day. Almost one truck-length. I put it in 4WD to see if I could power myself out to the street. I made it much of the way before giving up. The street wasn't plowed yet, either. I could have made it if I had needed to. 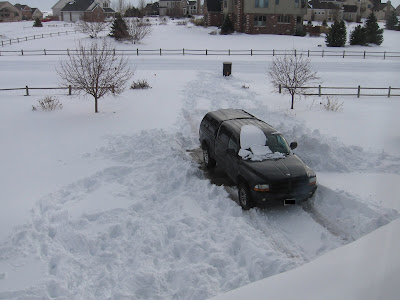 A team of people with skid loaders showed up later in the day to clear the streets. This guy promptly got stuck. He spent about 10 minutes trying to get free. They managed to plow one car-width around the whole subdivision yesterday. This skid loaders have been zooming around all day today and have managed to get most everything opened up. 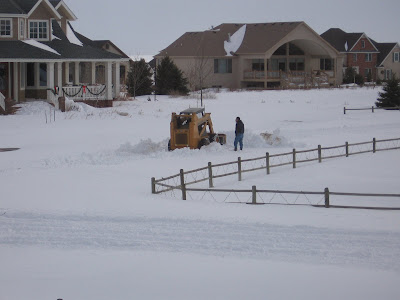 Right before dark, I got clearance from The Mrs. to go shovel some more. I spend about an hour and a half and got almost all the way to the street. Poor, lonely garbage can. 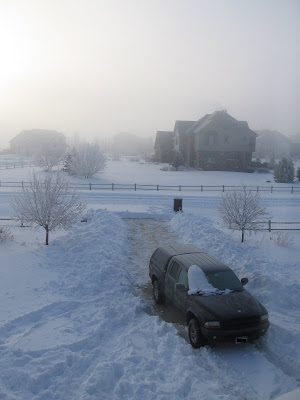 The skid loader guys cleaned out that last 10 feet this morning. So I've been working on the part up next to the truck that leads to the garage bay where the winivan is parked.
Posted by CherkyB at 9:51 AM

My heart goes out to GarbieC.
He looks so lonely in his optimistic waiting to be picked up.

I think the garbage can is quite happy being out in the fresh air...

What a beautiul house!

The garbage can is still out there. I'll probably bring it in for Christmas.

That house is the one across the street. Ours is not as spectacular.

I saw the inside ya know (just a bit) and it sure is nice!