Today was my day to sleep in. What that means is that The Mrs. gets up with MaxieC, but leaves the bedroom door wide open so that the rising sun comes through the entryway clerestory window and shines directly in my eyes. Then I get up and close the door. Then FreddyC gets up and barks at the closed door so he can go out. So I open the door and then close it again. Then five minutes later, he barks again to come back in. So then I let him in and leave the door open enough for him to go in and out.

But this means I can hear MaxieC. Not a quiet kid, that one.

Then, finally I get back to sleep. Eventually, I will be awakened by this, coming from right next to the bed:

I got up this morning with purpose. I was going to go to Target to buy a scale. There's no sense in cutting out between-meal snacking if you can't track the progress. The Mrs. asked if I had plans for the day, and I said, "Yes, I'm planning to go to Target."

Then she took me aside and asked, "Is this a trip we can all go on?"

Now, I thought for a minute. She's asking if I'll be buying Christmas presents at Target, I think. But maybe I just want some alone time after the fiasco that was yesterday. But I know I'm not allowed alone time on weekends because The Mrs. considers my time at work to be alone time.

She has, to this day, absolutely no idea what my job is like. I've explained it many times, but it's as if she'd stuck her fingers in her ears and said "blub blub blub blub" every time for all she has absorbed about it.

Oh joy. The whole fambly is now off to Target. The Mrs. has decided to make a side run to the pet store (which is right next door) to return all the unopened hamster Christmas presents, given the untimely demise of dear Angibelle. And she's decided we should buy a whole bunches of lights to put on one of the trees in the front.

One of the trees. Keep that in mind.

The shopping trip went pretty smoothly, all things considered. The only squabble was when MaxieC and HannieC both wanted to put the credit card into the magic credit-card sucking device that Target so uniquely has. This was resolve by letting MaxieC put the card in, and then letting HannieC sign the screen. (I may have helped her a little bit with my signature.)

When we got home, it was 11:45, and The Mrs. suggested we start hanging Christmas lights. I put my foot down. No. It's time for lunch.

As per usual, The Childrens ran around like crazy idiots during lunch. Except for MaxieC, who sat quietly and ate the bread off his sandwich (to which he required to have more mustard added) without touching the innards.

I was sitting there, minding my own bidness, quietly eating my sandwich, when HannieC came up and shrieked as loudly as she could right into my ear. To which I, quite naturally, responded by yelling, "Jesus F'cking Christ!" It being the holiday season and all.

The Mrs., always the smart-arse, said, "Have you had enough parenting already today?"

I am apparently very bad at this parenting thing. But that's OK, since it doesn't pay anywhere near as well as blogging does.

The Mrs. then said, "I wonder how long it will be before we hear that one come out. I bet it'll be when your parents visit, and MaxieC will yell it at your mother."

We went outside shortly thereafter to being with the Christmas lights. The plan was to string icicle lights on the fence across the front of the property on the left side of the driveway, and then to light up the 15' pine tree in the center of the yard. The Mrs. was going to handle the fence lights, and I was going to light up the tree.

Fatal flaw - no one was assigned to watch The Childrens. I figured we'd just let them play in the front yard, which is 5x the size of our old back yard. And there's no traffic on the street or anything. HannieC did fine, riding her Big Green Machine around. MaxieC, being two, headed straight for the Koi pond. He got out his leaf net, and started fishing out the leaves. The Mrs. could not handle it, since we couldn't see MaxieC behind the bush in front of the pond, and fretted up a storm.

So we had to take turns watching MaxieC.

We ran into troubles in the lighting plan right off the bat. The icicle lights said you couldn't string more than 3 strings together, each string was 10 feet, and we had about 80 feet to do. So we decided to light up 30 feet on either side of the driveway. This required me to figure out how to run an extension cord through about 30 feet of 15" diameter drain pipe that passes under the driveway, but I did that in short oder with some lengths of conduit that came with the garage and could be fitted together to make a pipe that long.

Then I wired up the tree while The Mrs. tried to get MaxieC to nap. HannieC tried to help me, but mostly she just played on the stepladder. Here is the view from in front of the icicle-lit fence and the tree behind it. The smaller tree to the left of center is one of the neighbor's trees. This is pretty much all we had planned to do. 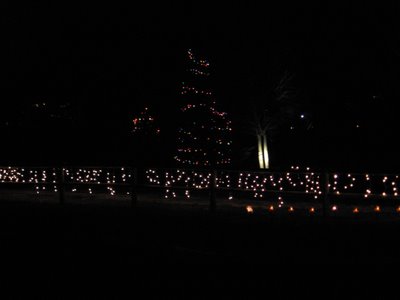 But then The Mrs. noticed that we had some lights leftover. So she decided to light up the little bush in front of the Koi pond. Then, she also decided we should light up the 20' pine on the right side of the driveway. This required a trip to Ace Hardware, since I didn't have any lights for that tree, not did I have enough extension cords and whatnot.

I took MaxieC with me to Ace. They have free popcorn. He loves that. He fell asleep in the truck on the way home, so I left him there while I wired everything up.

But The Mrs. was not done. No. She discovered even more lights, and wired up two more little evergreens by the Koi pond. Of course, I didn't have the hardware necessary to power this, as I bought only what I needed on the last trip to Ace, so it was back to Ace again. When I got in the truck, MaxieC woke up. He wasn't all that happy about going back to Ace, but whatever. Here is the right side of the driveway, including the 20' tree lit up in green, the icicle fence, and the three bush/trees around the Koi pond. 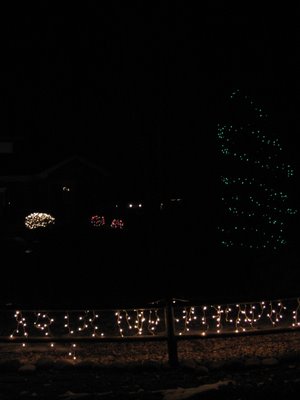 This is the view west (left) from the driveway. The neighbors outdid us. I'm sure next weekend will involve many trips to Lowes and Target and Ace until we reach parity. 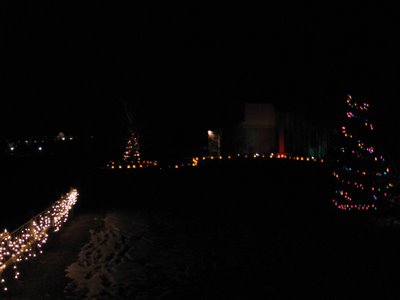 I guess I never posted a picture of our big, fat, and slightly bent Christmas tree. Here it is: 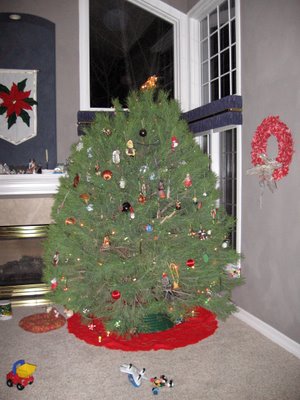 And while I was digging through the camera memory, I found a Thanksgiving turkey picture. This picture I like to call, "That's right - it's almost MaxieC's birthday." 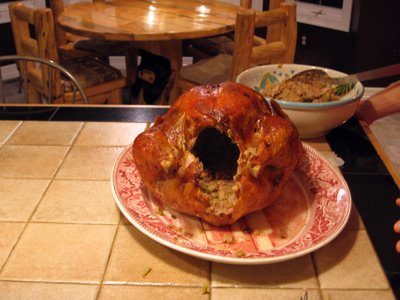 And there I was, thinking that's a lovely close-up on Lucy, the mummified chicken.

Wow, you guys are way ahead of us on the Christmas tree.
We've had our first date with it only today.

will he use his head?

I'm wondering if BrainkyP is as sick as CherkyB, or off on a totally different tangent!

CherkyB - you started off great w/ "It's beginning to look a lot like ... your momma", went downhill a bit w/ your Sunday morning wake up, hit rock bottom for a long time, and then pulled the chicken out of your butt.

Wow - I laughted, I cried, I wondered why the frack I kept reading.

You kept reading because, like so many of my fans, you are a simpleton.

Yes. And he's perfect for you.

Ooooohhh - CherkyB is sure full of it tonite. One insult right after another.

Your tree is a riot!